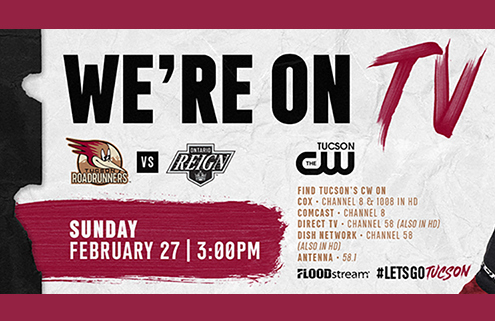 Tucson, Arizona – The Tucson Roadrunners, owned and operated by the Arizona Coyotes, will televise Sunday’s 3 p.m. game with Ontario on The CW Tucson to wrap up Roadrunners Fight Cancer Weekend.

The broadcast is the fifth of six to be broadcast during the 2021-2022 season. The regular season television broadcast finale will be Saturday, April 16 when Tucson hosts Colorado at 7 p.m.

On this Sunday’s broadcast, “Voice of the Roadrunners” Adrian Denny will once again be joined by the Arizona’s Daily Star’s Brett Fera and the game will also be simulcast on Fox Sports 1450AM, iHeartRadio app and AHLtv.com. During the First Intermission, Roadrunners players will sound off on their favorite restaurants in Tucson. During the Second Intermission, Roadrunners Fan Rigo Arce will be featured in “My First Roadrunners Game” and also include a wrap up to Roadrunners Fight Cancer Weekend. The broadcast will also include: live interviews with Head Coach Jay Varady before puck drop and a select player after the first and second period.

About FLOODstream
The Roadrunners on The CW Tucson are produced by FLOODstream. FLOODstream is a leading producer of live sports broadcasts and event webcasts.  Based in Phoenix, Arizona, FLOODstream owns and operates three high-definition production trucks and a remote production Master Control facility capable of supporting live events nationwide.  The company’s clients include high-profile organizations at the high school, college and pro sports levels, including Division I college basketball, baseball and football.  FLOODstream’s productions appear regularly on major national and regional sports networks and streaming platforms. Their website can be visited HERE.