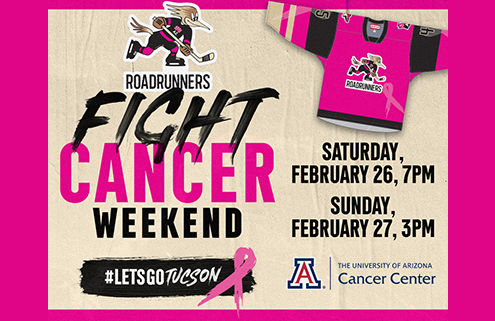 Tucson, Arizona – The Tucson Roadrunners, owned and operated by the Arizona Coyotes, will host Roadrunners Fight Cancer Weekend Saturday at 7 p.m. and Sunday at 3 p.m. when they play the Ontario Reign from Tucson Arena.

The team will be wearing hot pink jerseys that will be auctioned off live after Sunday’s game with all proceeds going to Banner Health University of Arizona Cancer Center.

The Roadrunners Fight Cancer ticket package includes four tickets and $20 in Concessions Vouchers that can be purchased at TucsonRoadrunners.com/Fight. There will also be Hot Pink replica jerseys and t-shirts on sale at the team’s Just Sports Merchandise Stands. Pink Lemonade will be available for $2 at Tucson Arena Concessions Stands.

Upon entry, fans will be given “I Pink For” signs to fill out and show who they are fighting for and supporting in the battle against cancer. The team will also hold a pregame “phone light” moment of silence and there will be a pink photo booth for fans to tag the Roadrunners and hashtag #IPinkFor. In addition, support groups, cancer research organizations, and other cancer fighting non-profit groups will be at the game for fans to learn more about treatment and prevention. Roadrunners Season Ticket Member Eric Hanson’s journey with breast cancer will be highlighted on the video board and friends from Banner Health will also be dropping the ceremonial first puck at both games.

Saturday, Dillinger Brewing Company at 402 East 9th Avenue will be offering $5 Roadrunner Reds before and after the game.

Sunday’s game will be televised live on the CW Tucson and feature a special interview with Dr. Taylor Riall, a surgeon with Banner Health who was recently diagnosed with cancer.

Also, this weekend at the Roadrunners Give Back table at the top of section 216 and online at TucsonRoadrunners.com/HDA, the Roadrunners will continue selling Boko Imama’s “Enough is Enough, All for All for All” T-Shirt to benefit the Hockey Diversity Alliance. Game Worn Kachina Jerseys for both Imama and #34 Stephen Harper are also being auctioned off for the Hockey Diversity Alliance at TucsonRoadrunners.com/February as part of the team’s Black History Month Celebration. The auction goes through Monday at 9 p.m.

RRTV In The Community: Dusty Thanks Our Healthcare Heroes
Scroll to top