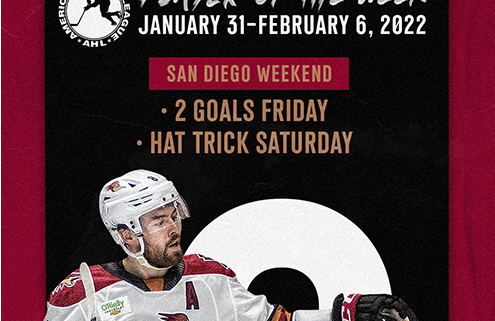 SPRINGFIELD, Mass. … The American Hockey League announced today that Tucson Roadrunners Michael Carcone has been selected as the AHL Player of the Week for the period ending February 6, 2022.

Carcone scored five of the Roadrunners’ eight goals during a two-game visit to San Diego last week over Friday and Saturday games.

On Friday evening, Carcone scored twice and was credited with a game-high six shots during Tucson’s 5-3 loss to the Gulls. Then on Saturday, Carcone recorded his fourth career AHL hat trick as the Roadrunners earned a 5-4 victory. He became the fourth Roadrunners skater this year to record a hat trick in the contest as well.

A sixth-year pro from Ajax, Ont., Carcone has collected 83 goals and 84 assists for 167 points in 318 career AHL games with Tucson, Belleville, Toronto and Utica. He also led Tucson in goals last season with 15. He spent the 2020-2021 season with the Roadrunners on loan from another NHL organization before earning a two-year, two-way contract with the Coyotes this past summer. He was named AHL Player of the Week for the first time in his career on April 12 after totaling six goals in two games against San Diego April 9 and 10 of 2021.

Carcone and the Roadrunners will look to make it three wins in their last four games when they continue their trip in Abbotsford, British Columbia at 8 p.m. tonight against the Canucks.