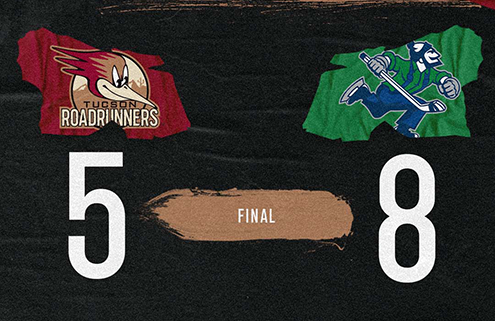 Abbotsford, British Columbia – The Tucson Roadrunners reached the second stop of their six-game road trip, as they visited the Abbotsford Canucks in British Columbia for the first time Monday night. The two teams combined for 13 total goals on 72 shots as the Canucks defended their home ice with a 8-5 victory, their first win against the Roadrunners in franchise history. Cam Dineen, Jan Jenik, Ben McCartney, Travis Barron and Matias Maccelli all notched multiple-point performances, with Maccelli (4a) recording four points for the third time in his rookie campaign.

Tucson faced an early 1-0 deficit when Abbotsford opened the scoring 3:11 into the first period, but quickly answered back with Mike Carcone’s team-leading 16th goal of the season 1:19 later. The goal gave the reigning AHL Player of the Week his sixth goal in as many periods, and second-straight contest where Carcone provided the first score for Tucson. The Canucks retook their lead just over three minutes later with a four-on-three goal, with the 2-1 advantage lasting the remainder of the opening frame. Despite no scoring in the final 12:22 of the first period, Abbotsford quickly went to work extending their lead in the middle frame. Sheldon Rempal netted a pair of goals in the first 6:05 of the second period, including the second goal while on the man-advantage for the Canucks. The Roadrunners got back to within a pair of goals with their first power-play strike of the night by Jan Jenik with 5:07 remaining in the period. Jenik scored the goal with a wraparound behind the Abbotsford net as Tucson’s five-on-three power-play expired into a standard five-on-four advantage. The Canucks pushed their lead back out to 5-2 just 30 seconds later to cap off a three-goal second period for the home team. Abbotsford accrued their largest lead of the night at 7-2 with a pair of goals 42 seconds apart in the early goings of the third period, which included their third power-play goal of the game. The Roadrunners netted their second man-advantage score of the contest less than a minute later when Captain Hudson Fasching scored a goal up close. Abbotsford once again had an answer for the Tucson attack with their fourth and final power-play goal of the night, making the score 8-3 in their favor and matching their largest advantage of the game. Travis Barron and Cam Dineen scored a pair of goals for the Roadrunners 1:04 apart late in the third period, with Dineen’s goal marking the team’s third power-play strike of the contest to match a season-high. The final 5:31 of regulation saw two instances of coincidental minor penalties but no more scoring, as the Canucks came away with an 8-5 victory for their first against the Roadrunners in their inaugural season. Tucson goaltenders Josef Korenar and Ivan Prosvetov combined for 31 saves.

The Roadrunners will wrap up their first-ever trip to Abbotsford Wednesday night at 8:00 p.m. MST. Coverage begins at 7:45 on Fox Sports 1450AM with Roadrunners Warm-Up hosted by Jimmy Peebles. Then, “Voice of the Roadrunners” Adrian Denny will have all the action live from the Abbotsford Centre as Tucson will look to finish the season 3-1 against the Canucks.

“We just have to bear down in the D zone and do the little things to help our team win. There’s things we can tighten up and things we know we can improve on to turn it around.”

SPECIAL-TEAMS SHOWDOWN- The Roadrunners and Canucks combined for seven power-play goals in their midweek matchup Monday night at the Abbotsford Centre. Jan Jenik, Hudson Fasching, and Cam Dineen each cashed in for Tucson while on the man-advantage, with forward Matias Maccelli assisting on each of the goals. The Roadrunners matched their season-high for power-play goals in a game, which was previously reached twice against the Ontario Reign (November 12, 2021 and January 23, 2022).

Watch reigning AHL Player of the Week and Tucson Roadrunners forward Mike Carcone open the scoring for Tucson in Monday’s matchup with the Abbotsford Canucks. The goal capped off a stretch for Carcone that saw the 25-year-old net six goals in six periods, dating back to the second period on Friday against the San Diego Gulls.

Tucson Roadrunners Captain Hudson Fasching battles for the puck in Monday’s contest with the Abbotsford Canucks. Fasching tallied a power-play goal in the third period at the Abbotsford Centre, bringing the 26-year-old to 20 points (7g 13a) on the season.

Q and A With Roadrunners Captain Hudson Fasching
Scroll to top