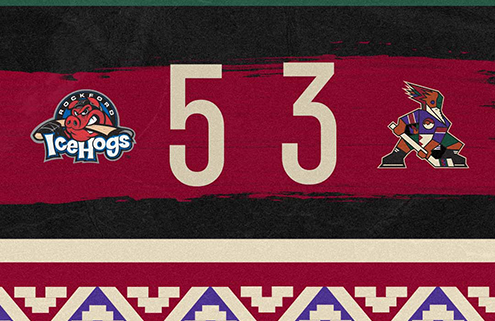 Rockford, Illinois – The Tucson Roadrunners wrapped up both the weekend series and season series with the Rockford IceHogs Sunday afternoon at the BMO Harris Bank Arena. The Chicago Blackhawks AHL affiliate jumped out to a 4-0 lead in the opening 34:33 on their home ice, before Tucson battled back to pull to within one goal late in the third period. An empty-net score for Rockford with 44 seconds remaining put the game away for the IceHogs at 5-3. Goaltender Rasmus Korhonen made his North American Professional debut for the Roadrunners, as the 19-year-old stopped 24 shots faced.

Watch Tucson Roadrunners forward Mitch Lewandowski put Tucson on the board with his second professional goal Sunday afternoon against the Rockford IceHogs. The 23-year-old has tallied three points (2g 1a) in 12 games since joining the Roadrunners on March 11 by way of Michigan State University.

COLLEGE CREDITS – The Roadrunners had four recently acquired skaters out of college tally at least a point during the weekend against the Rockford IceHogs. Saturday saw Colin Theisen tally his second multiple-point performance (1g 1a) since joining Tucson from Arizona State University. Forward Oliver Chau from Quinnipiac dished out an assist in each matchup with Rockford for his first two professional points. Also contributing in Sunday’s series finale were forward Mitch Lewandowski (1g) and defenseman Brandon Estes (2a) from Michigan State University and Union College, respectively.

Sunday’s matchup with the Rockford IceHogs marked the North American Professional Debut for Tucson netminder Rasmus Korhonen. The 19-year-old was drafted by the Arizona Coyotes in the fourth round (#122 overall) of last year’s NHL Draft and made 24 saves in his first action as a Roadrunner. The native of Oulu, Finland became the youngest player to make his debut in Tucson franchise history, a record previously held by current forward Ben McCartney.

“It was a heck of a play by [Brandon Estes], a great pass and I was fortunate enough to put it in. Ever since that goal, we put the gas on, got back into the game and gave ourselves a chance at the end.”

Tucson forward Mitch Lewandowski on his second period goal which sparked three-straight scores from the Roadrunners Sunday afternoon in Rockford. Assisting on the goal was defenseman Brandon Estes for his first professional point.

Sunday’s game was the fourth time in as many meetings between Tucson and Rockford this season where the home team scored first. The IceHogs jumped out to a 1-0 lead with a goal 9:36 into the opening frame, marking the latest score to start a game between the Roadrunners and IceHogs this season. Rockford extended their early lead to 2-0 with a goal in the final 4:19 of the first period. After a combined 66 penalty minutes in the series opener on Saturday, both first period goals were scored while skating five-on-five. Sunday’s game saw just a pair of minor penalties, one for each team, after the first two periods of play. In the span of 3:15, the IceHogs added another pair of goals in the latter half of the middle frame to make it a 4-0 lead, their largest of the contest. Tucson got on the board in the final 1:57 of the second period with a goal by Mitch Lewandowski, his second in 12 games since joining the Roadrunners March 11. Assisting on the goal was defenseman Brandon Estes for his first professional point in his third outing with Tucson. The Roadrunners entered the third period trailing the IceHogs 4-1, marking the third time in four matchups against Rockford this season with five combined goals in the first 40 minutes of play. Tucson pulled to within two goals of the IceHogs 6:17 into the third period, as defenseman Ty Emberson lit the lamp for the third time this year to make it a 4-2 game. The Roadrunners grabbed another goal for their third-straight score 12:44 into the final frame, scored by Captain Hudson Fasching for his 12th of the season. Assisting on the score were two of the newest Tucson skaters Oliver Chau and Brandon Estes, Chau’s second point (2a) of the weekend and Estes’ second assist in the series finale. After trailing 4-0 late in the second period, Fasching’s goal cut the IceHogs lead to 4-3 with 7:16 still to play in regulation. Tucson continued to push for a fourth goal, but an empty-net goal for Rockford in the final minute of play ended the Roadrunners comeback attempt. The IceHogs came away with a 5-3 win in the series finale at the BMO Harris Bank Center to conclude the season series with Tucson.

The Roadrunners will return home for a pair of games with the Colorado Eagles Friday and Saturday to wrap up the season series. Friday’s opener with the Colorado Avalanche AHL affiliate is scheduled for 7:00 p.m. MST, with coverage beginning at 6:45 p.m. MST on Fox Sports 1450AM with Roadrunners Warm-Up hosted by Jimmy Peebles. Then, “Voice of the Roadrunners” Adrian Denny will have all the action live from the Tucson Arena.

Tucson Roadrunners Road Ahead: Weekend For The Fans
Scroll to top