ROADRUNNERS GET BACK TO WIN COLUMN WITH WILD ONE

With six goals in the final 40 minutes on Tuesday the Roadrunners returned to their winning ways with a 7-4 victory over their I-8 Border Rival, the San Diego Gulls.

Despite a rocky start that saw the team allow the first goal, a shorthanded tally and trail after 20 minutes, the team remained within one thanks to Michael Bunting’s fifth of the season.  The Western Conference assists leader one-timed home a drive on a designed play following an offensive zone faceoff win by Beau Bennett.

The back-and-forth affair continued into the second and it was Blake Speers who tied the game once again for the home team with his first of the season.  San Diego then took the lead once again four minutes later but it would be the final time as Kyle Capobianco made it 3-3 and then Brayden Burke put his club in the driver’s seat for good with his 14th of the season.

Ahead by one entering the final period of regulation, Kelly Klima became the first Roadrunner to provide insurance with a back door tap in from Bunting, who was en route to a three-point performance.  The Gulls would bring it back within one but Lane Pederson, who now ranks third in the Western Conference with his 16th goals, provided the cushion once again.

An empty-netter and second of the night from Brayden Burke capped the evening’s scoring, making it already the sixth time this season that the Roadrunners have scored seven or more.

Earning his 10th win of the season in just 13 games, Ivan Prosvetov made 30 stops on 34 attempts.

When all was said and done, five Roadrunners finished with multiple points, including three by Bunting, Capobianco and Pederson.

“Everyone’s a little relieved. We finally got back to playing how we were before the break.  We started slow but we found our legs in the second and kept in rolling.  We had all four lines, everyone was playing the right way and committed.  We got the result we wanted.”

Roadrunners forward Lane Pederson expressing his relief and sharing why he thought his team came out on top Tuesday night.

Following Sunday’s game against Colorado head coach Jay Varady said corrections needed to be made. He wanted his special teams to be better and he said his team spent a lot of time on the perimeter, suggesting they hadn’t created enough chances.

Well, his penalty kill was perfect, his power play got a goal and they scored seven.  It’s safe to say corrections were indeed made.

Blake Speers was all over the place, in a good way, in the win.  With Michael Chaput being recalled to Glendale, lineup adjustments had to be made and Speers made the most of his chance on the top line right wing.

Additionally great on the penalty kill, check out him picking his post in the second period for his first in brick and black.

Oh yeah, it felt good for Blake, too. 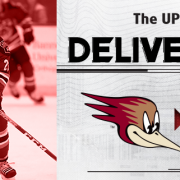