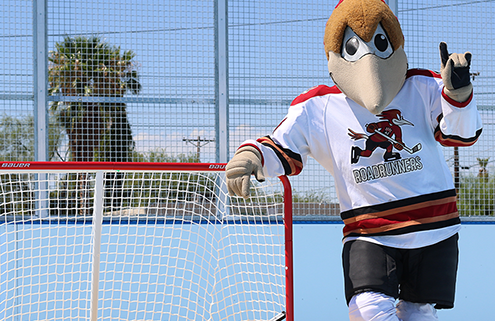 With the Vegas Golden Knights new AHL affiliate the Henderson Silver Knights playing initially at the Orleans Arena, Tucson might feel the most at home of any road team. The Orleans Arena, as you see below, has the same layout as Tucson Arena with the horseshoe all lower bowl seating configuration leading to the scoreboard.

With Conor Garland, being nominated for the NHL’s 2020 Bill Masterton Trophy that honors the player who best exemplifies the qualities of perseverance, sportsmanship and dedication to hockey, it was fun to take some Tucson favorite fan memories on social media on Thursday. Below are two that came in.

BACK IN THE SADDLE

Adin Hill and Brayden Burke were among two 2019-2020 Roadrunners, as identified by Alex Kinkopf, who took the ice for the first informal Phase 2 skate at Gila River Arena Thursday. CLICK HERE to read his full recap.

Speaking of Brayden, before he made the drive down last weekend, Alex got the plan for the drive. CLICK HERE to read that.

Road Trip Food Picks this week from Loveland, Colorado (Colorado Eagles) and Nordy’s BBQ and Grill where the goal is always to get there between 11 a.m. and 2 p.m. to take advantage of their $12.49 lunch buffet. My model is two trips through the line followed by a third for their Cobbler for dessert and an additional helping of Cornbread Stuffing.

Speaking of Adin, let’s go back to January 21 in San Diego