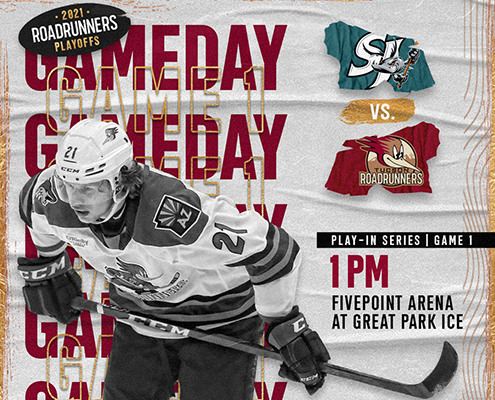 The Tucson Roadrunners go on the road to Irvine, California to face the San Jose Barracuda in the first game of the 2021 AHL Pacific Division Playoffs. The winner of Tuesday’s game will play again on Wednesday, with a chance to advance to the next round. The Roadrunners opened the 2021 regular season against San Jose, going 2-0 in the opening series at the Tucson Arena.

Three Things
1) Tucson opened the season with a 2-0 record after facing the San Jose in the opening weekend of the 2021 AHL regular season. Despite the games taking place at the Tucson Arena, San Jose was the official home team. Those games were the last meetings between the Roadrunners and Barracuda, and one team’s season will start and end with the same opponent. In the two games taking place February 7 and 8, the Roadrunners outscored San Jose seven goals to four. Among those scoring goals for Tucson were Tyler Steenbergen, Jan Jenik, Cam Dineen, Michael Carcone and Kevin Roy. Cam Dineen had the overtime winner in game one, in a 2-1 victory backed by 36 saves from Ivan Prosvetov. Prosvetov started both games for Tucson in the season-opening series.

2) The San Jose Barracuda enter the playoffs having lost their last four games, three against the top-seeded Henderson Silver Knights, and one loss to the next-highest seed, the Bakersfield Condors. Tucson and San Jose have a nearly identical goal differential, but Tucson has the special teams advantage. The Roadrunners have more total power-play goals, and a superior penalty-kill by over ten percent. Both teams have had six games go to overtime, but San Jose has yet to emerge victorious out of an extra period.

3) Another advantage for Tucson heading into Tuesday’s matchup is the performance of both teams in away games. With the game taking place in Irvine, California, both teams will be away from their home ice. The Roadrunners have arguably been better when slotted as the away team than they have been at home, posting a 9-8-2 record and the third-best winning percentage in the division for “away” games. Tucson has a positive goal differential as the away team, and a league-best 90.5 penalty-kill percentage in games without the last change. San Jose on the other hand, has had difficulty playing on opponent ice, posting a division-fewest five road wins and a .382 winning percentage, as the only team in the AHL Pacific Division to have a sub-.500 winning percentage in away games.

What’s The Word?
Tucson Roadrunners defenseman Cam Dineen on preparing to the play the San Jose Barracuda, a team Tucson hasn’t seen since the opening weekend of the season:

“It’s nice to play someone else for a change. The coaches will come up with a game plan, what they see from San Jose, and what we can do to be at our best against them. I think everyone will take those little cues and be ready to go on Tuesday.”

Number to Know
5 – The number of Roadrunners players entering the playoffs with an active point streak of two games or more. Jan Jenik leads the way with a point in each of his last four games with the Roadrunners, and points in his last six professional games, thanks to a two-game stint with the Arizona Coyotes of the NHL. After Jenik are Cam Dineen and Michael Carcone with streaks of three games apiece, and Ben McCartney and Frederik Gauthier each have two-game scoring streaks.