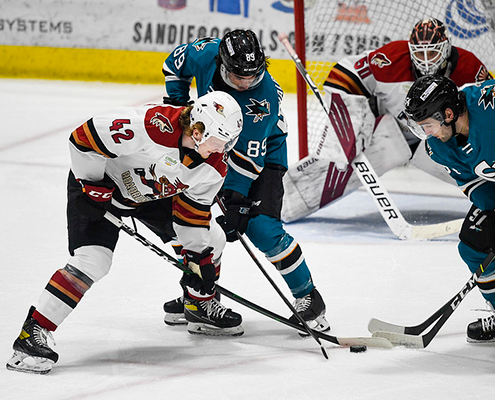 Irvine, California – The Tucson Roadrunners and San Jose Barracuda opened up the 2021 AHL Pacific Division Playoffs Tuesday afternoon, in a winner-take-all contest in Irvine California. The game was an evenly matched affair, with both teams recording 20 shots on goal and three trips on the power-play. San Jose emerged victorious by a score of 2-1, advancing to the play either the Ontario Reign or Colorado Eagles Wednesday evening.

The first period of the 2021 AHL Pacific Division Playoffs was a defensive battle between the Roadrunners and Barracuda, with only 11 total shots on goal in the 20 minutes of hockey. The teams traded early power-plays, but nothing came of it, and the score remained even at zero as the clock struck zero on the opening frame of the 2021 AHL Pacific Division Playoffs. Tucson had some solid puck possession in the first period and looked to continue it in the second frame. It took just over 23 minutes for the first goal of the game to be scored, but that goal belonged to the Roadrunners. Jan Jenik gave Tucson a 1-0 lead in the second period, extending his point streak to seven professional games, split between the Roadrunners and the Arizona Coyotes of the NHL. Tucson would hold onto the 1-0 lead for the next eight minutes, before San Jose tied up the contest at one a little past the midway point of the second period. The score would remain knotted at one as the teams entered the final twenty minutes of the win-or-go-home matchup. The game could not have been more even up to that point, with both teams recording 13 shots on goal, with two chances on the power-play apiece as well. After both teams traded unsuccessful power-plays, San Jose broke the stalemate near the midway point of the third period, making the score 2-1. The Roadrunners needed to mount a comeback to keep their season alive. The Roadrunners pulled goaltender Ivan Prosvetov in favor of a six-on-five attack for nearly the final two minutes, in hopes of scoring that equalizing goal. San Jose was able to hold onto their lead as the clock struck zero on the third period, as they advance to second round of the Play-In Tournament.

“I thought the chances were on our side and it’s the old story that we’ve been telling year. Opportune times to make the opportune play and we just weren’t able to convert. I have to give credit to our guys. Our players have played hard all season long, it was an excellent effort every day from the guys. Our guys played with a lot of character this year and just some timing issues as we talked about.”

Watch Tucson Roadrunners forward Jan Jenik score his first career playoff goal in the first period of Tuesday’s battle with the San Jose Barracuda. Jenik extended his active point streak to seven games with the goal, spanning five games with the Roadrunners and a pair of games with the Arizona Coyotes of the NHL.

Tucson Roadrunners forward Brayden Burke battles for the puck in Tuesday’s playoff matchup with the San Jose Barracuda in Irvine, California. Burke made his Tucson Roadrunners debut in the team’s last trip to the playoffs in 2018 and has developed into a solid playmaker for the Roadrunners since then.

Tucson Roadrunners 2021 Road That Was
Scroll to top