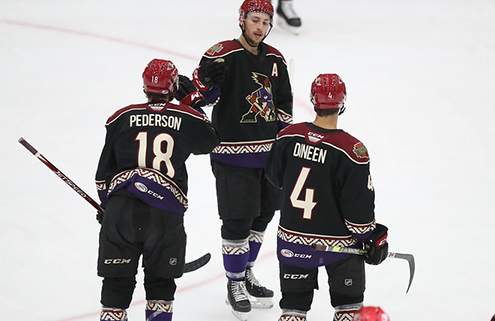 Fifth Anniversary Festivities
At the forefront of the Roadrunners 2021 season was the celebration of five years in Southern Arizona. The team’s Fifth Anniversary logo was at center ice for every ice, and the team donned their Fifth Anniversary uniforms for a weekend slate of games on April 9 and 10 at the Tucson Arena. Once fans were back in the building, the Roadrunners unveiled their 2019-2020 Pacific Division Championship banner, after the abrupt end to last season in which Tucson was atop the division. Finally, the Roadrunners continued to embrace the history and heritage of the City of Tucson with their “El Lazo de Tucson” identity, taking inspiration from the Hispanic and rodeo footprints in the Old Pueblo.

Contributing To The Coyotes
Player development was the greatest success story for the Roadrunners and NHL affiliate Arizona Coyotes this season, as ten players dressed for both the Roadrunners and the Arizona Coyotes. Michael Bunting, a Roadrunners franchise cornerstone, emerged at the NHL level, tallying 10 goals and three assists in 21 games with the Coyotes. Called up to Glendale at the same time as Bunting was Tucson linemate Lane Pederson, who carved out a sizeable role with the Coyotes as well, scoring his first NHL goal in his debut on April 3. Jan Jenik and Victor Soderstrom each made their NHL debuts this season, and both scored their first NHL goals on May 7. As a matter of fact, Jenik scored a goal in each of his first two NHL games. Also making his NHL debut this season was goaltender Ivan Prosvetov on March 31, with his first NHL start taking place April 12. Former Tucson teammate Adin Hill served as Prosvetov’s backup that game.

Young Skaters Shine
With the departure of past fixtures of the Roadrunners lineup for the Arizona Coyotes of the NHL, the opportunity to make an impact on the team was presented to the group of young skaters making their debuts at the AHL level. Among those taking a giant leap forward in the 2021 season was forward Jan Jenik, a third-round pick by the Arizona Coyotes in 2018. The 20-year-old from the Czech Republic scored a goal in his second AHL game, first NHL game, and first AHL Playoff game all during his rookie season this year. Jenik ended the season on an seven-game point streak split between the Roadrunners and Coyotes. Fellow rookie Ryan McGregor led all Roadrunners rookies in points with 18, while Nate Sucese was a key fixture of a Tucson penalty-kill unit that consistently ranked atop the AHL. Sucese finished tied for second in the AHL for rookies with two shorthanded goals. 19-year-old forward and 2020 Coyotes Draft Pick Ben McCartney was a late addition to the Roadrunners roster after finishing second in the WHL in scoring, recording five points in four regular season games with Tucson down the stretch. 2019 Coyotes First Round Pick Victor Soderstrom spent most of the season with the Roadrunners, recording 10 points and even making his way back to the Coyotes, scoring his first career NHL goal at the end of their 2021 campaign. In his final nine regular season games combined between the Coyotes and Roadrunners, Soderstrom put up two goals and four assists.

Mike And Mike: AHL Players Of The Week
Tucson Roadrunners forwards Michael Bunting and Michael Carcone each earned themselves AHL Player of the Week honors during the 2021 AHL season. The Roadrunners were the first of three teams to have multiple players take home Player of the Week honors this season. Michael Bunting was the first to be named Player of the Week by the AHL in only the second week of the season, becoming the first Roadrunner to win the award since Conor Garland in October 2018. Bunting tallied seven points and two game-winning goals as the team raced to a 4-0 start to open the 2021 campaign. The team wouldn’t have to wait long for another player to be recognized, as Michael Carcone was named AHL Player of the Week less than two months later, after a weekend that saw Carcone record six goals in two games against the San Diego Gulls.

A High-Flying, High-Scoring Victory
The Tucson Roadrunners set a franchise record for most goals scored in a game on May 1, when they traveled to Irvine California and came home with a dominant 9-2 over the San Diego Gulls, securing the I-8 Border Cup for another year. Jan Jenik and Josh Wilkins each netted two goals, while Michael Carcone dished out four assists. Goaltender Ivan Prosvetov made 47 saves to round out the strongest Roadrunners victory of the season.

Fans Found Their Way Back
The Roadrunners were able to gradually welcome more and more fans back into the Tucson Arena throughout the season, starting from 650 allowed into the building on March 16 up to 1,650 for the season finale on May 16. Every Roadrunners home game that allowed spectators was a sellout as fans were eager to see the team back in action. The team also hosted a vaccination site outside of the Tucson Arena in conjunction with the Pima County Health Department on April 23 and 25.

What’s Next
Keep an eye out this summer as the Roadrunners will continue to serve the community of Southern Arizona with all kinds of events and giveaways for Southern Arizona and Roadrunners fans. The team will be back on the ice in mid-October, as they’ll look to reclaim the Pacific Division crown. Roadrunners mascot Dusty will be making the rounds as well this summer.