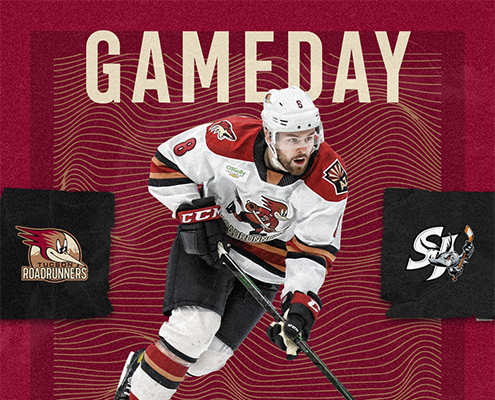 Three Things
1) The Roadrunners scored goals in quick succession during the preseason, with two tallies less than a minute apart during the first period versus San Jose last Wednesday, and two scores 31 seconds apart in their first game against Ontario the week before.

3) Tucson finished the preseason going 3/10 on the power-play and a perfect 10/10 on the penalty-kill in three games. Roadrunners Forward Brayden Burke was tied for second last year in power-play goals across the league with 13.

“I think just making plays, playing smart hockey, getting the puck to the net and helping create scoring opportunities to help the team win on a daily basis.”

Newcomer Kevin Roy on how he can contribute to the team this season.

Number to Know
36  The number of shots goaltender Ivan Prosvetov faced against this San Jose team last week in his only action of the preseason. He stopped 32 of these shots. Prosvetov made 762 saves last season, with a .909 SV%.