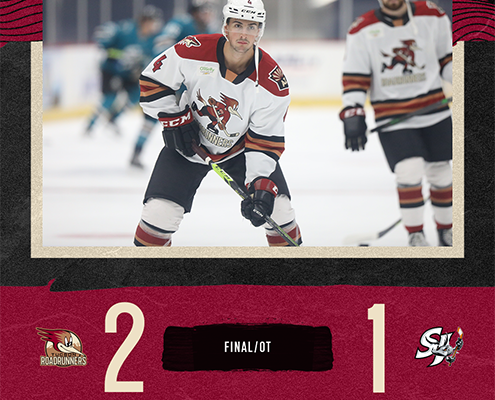 Tucson, Arizona – The Roadrunners opened their 2021 season Sunday afternoon, taking on the San Jose Barracuda at the Tucson Convention Center and left with a 2-1 overtime win.

The first period didn’t see any goals, but there was plenty of action to go around. The Roadrunners went on the power-play early in the period, courtesy of a hooking penalty by San Jose defenseman Jaycob Megna. Things got physical later into the period, with several players having to be separated by the officials, landing both teams a roughing penalty. Kevin Roy nearly scored off his own rebound during the 4 on 4, but Barracuda goaltender Alexei Melnichuk got in the way at the last moment. Goaltender Ivan Prosvetov made 13 saves in the first period.

The second period was shaping up to be more of the same until Tyler Steenbergen found the back of the net with 1:49 left on the clock. Newcomers Josh Wilkins and Ryan McGregor assisted with the score. The intensity from the first period carried over into the second, as Tucson and San Jose exchanged two penalties each that period and Tucson entered the second intermission with a 1-0 lead.

San Jose would tie the game up at one 6:24 into the third period. Barracuda forward John Leonard got the puck past Tucson goaltender Ivan Prosvetov for the equalizing goal. Both teams had solid chances to take the lead, but neither could capitalize, and the Roadrunners’ season opener would go to overtime for the first time in team history.

Extra time was needed to decide this contest, but it was not by much. After Ivan Prosvetov added two more saves to his stat sheet in the overtime period, Cam Dineen secured the puck off a rebound and buried it in the back of the net 1:17 into the overtime period. The Roadrunners start the season strong at 1-0 for the third-straight year.

Ivan Prosvetov was stellar in net tonight for the Roadrunners, stopping 36 of 37 shots that came his way. San Jose’s backstop Alexei Melnichuk was 23 for 25.

The Roadrunners will play their next game Monday, February 8th at the TCC against the same San Jose Barracuda, at 7 p.m. You can listen to the game in Tucson on FOX 1450 AM and on the iHeart Radio app or watch the game on AHL TV.

“Ivan made some exceptional saves throughout the game and definitely gave us a chance to win… Sometimes your goalie has to be your best player and tonight he definitely was.”

PICKING UP WHERE HE LEFT OFF – The Tucson Roadrunners’ only returning goaltender this season, Ivan Prosvetov made a remarkable 36 saves today vs San Jose, only allowing one goal. That was his most saves in a game since January 3rd last year vs San Jose, a 5-1 Tucson victory where he stopped 38 opposing shots.

Cam Dineen wasted know time ending this one as he pounced on a loose puck and drove it home.

Roadrunners players and coaches look out onto the ice during Sunday’s game against San Jose. It was the Roadrunners’ first regular season game since March 11th of last year. Michael Bunting (27, right) is serving as one of the Roadrunners’ team leaders this year in his fifth year with the club. He is the franchise leader in games played, goals and points, and played all 58 games for the Roadrunners last season.