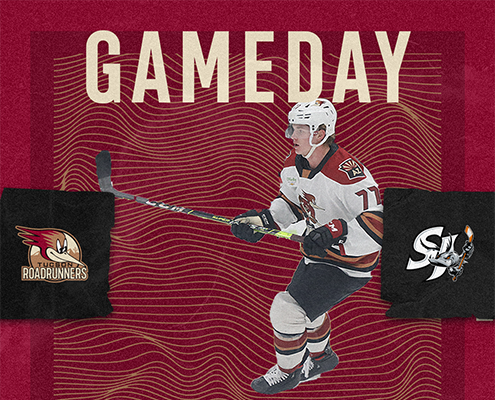 The 1-0 Roadrunners continue their opening weekend series with the San Jose Barracuda tonight at 7 p.m. at the Tucson Arena. Tucson defeated the Barracuda Sunday afternoon 2-1 in overtime as both teams got their 2021 seasons underway.

Three Things
1) The Roadrunners overtime win yesterday gave them a 1-0 start to the 2021 season, making it three seasons in a row where the Roadrunners have won their opening contest. Sunday was their first time starting the season against the Barracuda

2) Monday night represents the second regular game in a row for the Roadrunners against the San Jose Barracuda. Tucson will play 5 of their first 7 games to begin the season against San Jose over the next 15 days, split by a 2-game road series vs Ontario next weekend.

3) Roadrunners goaltender Ivan Prosvetov made 36 saves Sunday in a win over the San Jose Barracuda, his most in a game since January 3rd of last year. Despite the excellent performance, head coach Steve Potvin said he hopes the Roadrunners don’t have to rely on those types of performances from their backstop too often.

What’s The Word?
Roadrunners defenseman Cam Dineen on his overtime goal and what it means to start the season with a win:

“Going into this year I wanted to improve offensively, I thought I had a little bit more to show in that aspect… I think everyone contributed tonight, and a lot more can be brought from the little things guys did.”

Number to Know
77- The number of seconds in overtime it took before Cam Dineen buried the game-winner to give Tucson a 2-1 victory to open the season. Dineen, a defenseman, had 5 goals last year in his second season with the Roadrunners, with 9 assists and a +7 rating.