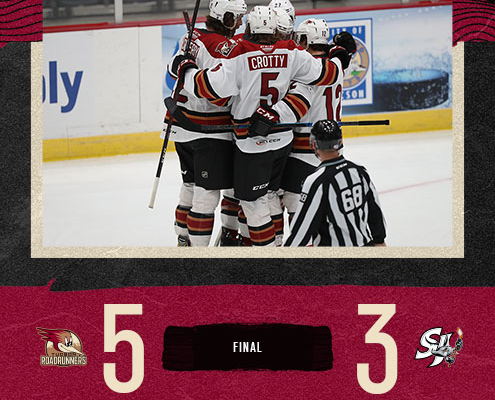 Tucson, Arizona– The Roadrunners continued their opening series vs the San Jose Barracuda Monday night, besting the Barracuda 5-3 to open the season 2-0 for the second time in the last three seasons

Both teams were quiet on offense until the last six minutes of the first period, which had each team scoring two goals. The Roadrunners broke the tie early in the second, scoring two unanswered to take a 4-2 lead entering the third. The Barracuda went on three straight power-plays in the third, reducing the lead to one in the process. But the Roadrunners were able to survive the onslaught and added another goal of their own to boost the lead back up to 2. The Roadrunners would go on to defeat the Barracuda 5-3, securing an opening series sweep and a 2-0 record heading into their first regular season road trip of the season. Ivan Prosvetov was once again solid between the pipes tonight for the Roadrunners, making 33 saves on 36 shots.

The Roadrunners will play their next game Friday, February 12th at the Toyota Sports Performance Center against the Ontario Reign, at 7 p.m. You can listen to the game in Tucson on FOX 1450 AM and on the iHeart Radio app or watch the game on AHL TV.

“With the skill we have on this line and the grit, we never doubted ourselves and we played well… all around I think it was a great team effort.”

Roadrunners forward Michael Bunting after the game on his line’s contribution in Tucson’s 5-3 win vs San Jose.

DON’T OVERLOOK IT
SHARING THE WEALTH – The Tucson Roadrunners had seven different players record a point, with Lane Pederson and Michael Bunting tied with three points with a goal and two assists apiece. Newcomers Jan Jenik, Michael Carcone and Kevin Roy each had a goal and an assist.

Roadrunners goaltender Ivan Prosvetov gets his stretches in before Monday night’s 5-3 victory over San Jose. Prosvetov started each of the first two games for Tucson, stopping 69 of 73 shots between the two contests. Prosvetov started back-to-back nights five times last season and won both matchups once (Dec. 20-21 vs Ontario).