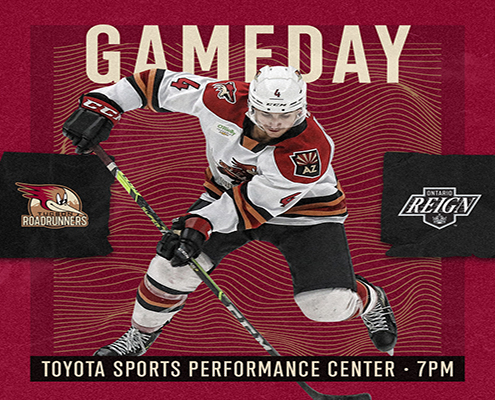 The 2-0 Roadrunners leave Tucson for the first time on the regular season for a two-game weekend series with the Ontario Reign. The first game will be Friday night at 7pm at the Toyota Sports Performance Center in El Segundo, California.

Three Things
1) The Roadrunners won both of their games against the San Jose Barracuda last weekend to open the season 2-0. Ontario, on the other hand, lost each of their first two games against the Henderson Silver Knights, and lost late in the game Wednesday vs San Diego to enter the weekend 0-3.

3) Roadrunners goaltender Ivan Prosvetov made 69 saves on 73 shots in the first two games of the season. Prosvetov started in net against the Reign four times last year, going 3-1 including an 8-0 shutout on December 21, 2019.

What’s The Word?
Roadrunners forward Lane Pederson on returning to the ice after missing the last month and a half of last season due to injury, and recording a goal and two assists in Monday’s 5-3 win to help give the Roadrunners a 2-0 start.

“It’s been a long time coming, over a year. It was nice to contribute [Monday], and for our team to get up to two wins here right off the bat and get the ball rolling here in this season that we’re all so excited about.”

Number to Know
10- The number of different Roadrunners players to record a point over the weekend. Veterans Michael Bunting and Lane Pederson lead the way with a goal and two assists apiece. Jan Jenik, Michael Carcone, and Kevin Roy all recorded their first goals with the Roadrunners Monday night in a 5-3 win over San Jose.

We’re Doing It Live
Roadrunners Hockey returns to the radio tonight at 7 p.m. as “Voice of the Roadrunners” Adrian Denny brings you all of the action on Fox Sports 1450 AM. Roadrunners Warm-Up starts at 6:45 p.m. and the game can be season on AHL TV as well.