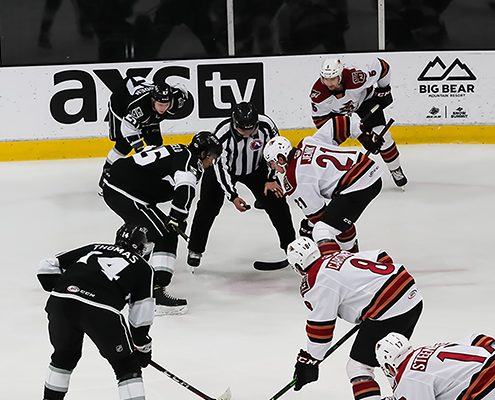 ROADRUNNERS GO OUT ON THE ROAD, SECURE 5-4 WIN AGAINST ONTARIO REIGN

El Segundo, California – The Tucson Roadrunners went out on the road for the first time this season and relying on their special teams defeated the Ontario Reign 5-4 in dramatic fashion to remain undefeated on the season at 3-0.

The game went back and forth throughout the night as the teams entered the first intermission tied at one. The Roadrunners jumped out to a 4-1 lead in the second, before surrendering three straight goals to Ontario to leave the game tied at 4 with less than ten minutes left in regulation. The stalemate didn’t last long, however, as Lane Pederson found the back of the net 39 seconds later to give Tucson a 5-4 lead. The Roadrunners would spend the last 8:45 holding onto the one-goal lead, but would eventually emerge victorious to improve to 3-0 on the season. They join Henderson and San Diego as the three undefeated teams remaining in the AHL Pacific Division. Ontario falls to 0-4, and will continue looking for their first win Sunday vs Tucson. Ivan Prosvetov was once again in goal for the Roadrunners, stopping 28 of 32 shots for his third win of the season.

The Roadrunners will play their next game Sunday, February 14th at the Toyota Sports Performance Center against the Ontario Reign, at 2 p.m. You can listen to the game in Tucson on Fox Sports 1450 AM and on the iHeart Radio app or watch the game on AHL TV.

“They had a lot of shots at our net, but we battled hard in key situations and key moments. I’m proud of the effort and the way the boys competed and stayed calm”

Roadrunners head coach Steve Potvin after the game on his team’s effort and tenacity in their 5-4 win over Ontario.

DON’T OVERLOOK IT
The Tucson Roadrunners scored three special teams goals in Friday night’s 5-4 win against Ontario. A power-play goal in the first period and another in the second, along with a shorthanded goal from Nate Sucese, all contributed to the team’s Friday night victory.

This goal by Lane Pederson 11:15 into the third period broke the brief tie and gave the Roadrunners a 5-4 lead that would end up as the final score. This game-winner by Lane was his second goal, and sixth point of the season.

Cam Dineen maneuvers behind the net in Friday night’s 5-4 win over Ontario. Dineen had his second goal of the season early in the second period, giving the Roadrunners an early 2-1.