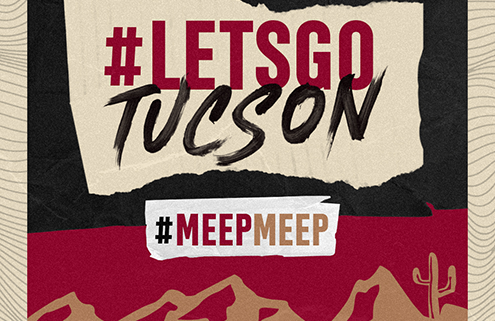 “The five players represent our team identity that we have built in Tucson,” said Roadrunners General Manager Steve Sullivan. “We are a team that strives to get better every day as we work to achieve our goals in a culture that resonates family.”

“The five players represent our team identity that we have built in Tucson. We are a team that strives to get better every day as we work to achieve our goals in a culture that resonates family.”

“These leaders cultivate the right paths for us on and off the ice. We are very excited for this team to begin game action to continue building on our processes that have made us successful here as we all continue to develop.”

Forward Michael Bunting is the Roadrunners all-time leader in games played (249) points (162) and goals (68). He finished second on the team in points last year with 49 on 12 goals and 37 assists; appearing in all 58 games for the Roadrunners. He scored his first NHL goal in his first NHL game with the Coyotes on December 11, 2018 at Boston.

Forward Jeremy Gregoire has been with the Roadrunners since the 2018-19 season. He has 29 career points with the team and finished second on the team in plus-minus last season with a plus-17. He was drafted in the sixth round of the 2013 NHL Entry Draft by Montreal.

Defenseman Dysin Mayo is one of three players to be with the Roadrunners since their inaugural season in 2016; along with Bunting. He led the team in plus-minus last year with plus-24. He was drafted by the Coyotes in the fifth round of the 2014 NHL Entry Draft.

Forward Lane Pederson led the Roadrunners in scoring during the 2018-19 season with 23 goals and 47 points. He was also the team’s leading scorer in 2019-2020 before sustaining a season-ending injury in January when he had 16 goals and 18 assists for 34 points in 32 games. He was selected as an AHL All-Star last season.

Defenseman Jordan Schmaltz was a member of the Stanley Cup Champion St. Louis Blues for the 2018-19 season. He was drafted in the first round of the 2012 NHL Entry Draft. His brother Nick plays for the Coyotes.

Tucson plays San Jose Sunday at 12 p.m. and Monday at 7 p.m. at the Tucson Arena. The games are scheduled “away games” for the Roadrunners. The team’s official home opener weekend is Thursday, February 18 at 6:30 p.m. and Saturday and Sunday, February 20 and 21 at 2 p.m.

First Fan Details
Working with Pima County, the City of Tucson and Tucson Arena; the Roadrunners announced Friday that the first three official home games will be closed to the public as all parties monitor the current public health situation. “Planning remains ongoing and fluid, as it has for the last several months, for us to welcome our fans back into Tucson Arena,” said Roadrunners President Bob Hoffman. “When that day comes, we have multiple measures in place for everyone to have a safe and enjoyable time cheering on the Roadrunners. We are optimistic that will happen this season as we continue to move forward together.”