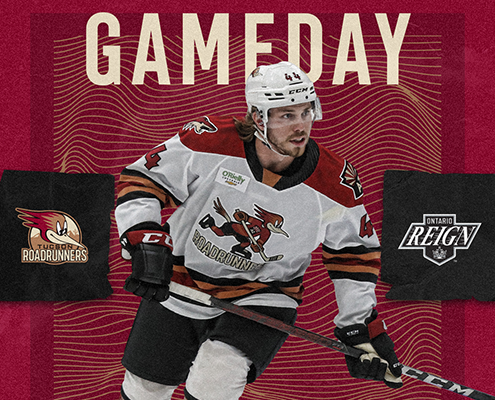 The Tucson Roadrunners head out on the road for a brief California road trip. They’ll play the Ontario Reign and San Diego Gulls on back-to-back nights. Tucson will take on the Ontario Reign Friday night at 7:00pm MST in Los Angeles, at the Toyota Sports Performance Center.

Three Things
1) The Tucson Roadrunners are looking to remain undefeated against the Reign for the 2021 season. Tucson won a pair of games against the Reign back on February 12 and 14, including a 4-3 overtime victory on Valentine’s Day. After Friday night’s contest, there will be five more meetings between these two teams, with four of the five taking place at the Tucson Convention Center.

2) Roadrunners veterans Michael Bunting and Lane Pederson are tied for fourth and fifth in the AHL in points, with 12 and 11 points, respectively. Bunting has contributed to all five of the Roadrunners power-play goals this season, scoring three and assisting on two.

3) The Tucson Roadrunners next eight games will be against either the Ontario Reign or the San Diego Gulls. After facing each team only once this weekend, the Roadrunners will return home and play a pair of games with each team. Following this stretch of four games in six days, Tucson will head back to California to face off against each team one more time.

What’s The Word?
Roadrunners forward Kevin Hancock on the depth and talent of Tucson’s lineup:

“We feel as a whole we can put anyone up and down in the lineup and they’ll fit right in with the other guys. That’s why we can get everyone through the game, get a lot of shifts, and create momentum.”

Number to Know
8 – The number of Tucson Roadrunners skaters with a multi-point performance through the first ten games of this season. Forward Kevin Hancock became the latest to do so after a two-goal night against Texas on Saturday.