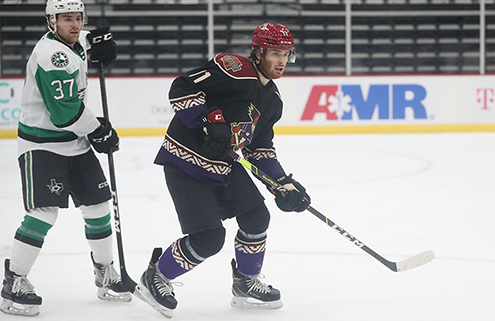 “The Roadrunners are proud to be the first pro sports organization in Tucson to invite spectators back to live events. Our entire focus for the last several months has been developing and implementing an approved plan to return fans safely to our games. We thank Pima County, the City of Tucson, Rio Nuevo, Visit Tucson and Tucson Arena for their support and assistance throughout this process.”

Roadrunners Season Ticket Members will be given top priority to return to games with the limited capacity. Any game tickets not used by Season Ticket Members will be advertised in advance for the general public to purchase. More information on ticket distribution and sales will be available in the coming days. Fans are encouraged to follow the team on Facebook, Instagram and Twitter while also regularly visiting TucsonRoadrunners.com for more information on how to attend games LIVE.

Where We Stand
The Tucson Roadrunners are currently 5-5-0-0, tied for third in the AHL Pacific Division in points. They have five straight days off before traveling to Los Angeles to face the Ontario Reign, followed by the San Diego Gulls in Irvine the following night.

A Familiar Face in Net

Longtime Tucson Roadrunners goaltender Adin Hill was back in Southern Arizona last weekend, on a conditioning assignment from the Arizona Coyotes. Hill, who has now appeared in all five seasons of the Roadrunners’ history. He started back-to-back nights Friday and Saturday against Texas, and made 51 saves between the two games.

Who’s on the Schedule

The Roadrunners will be traveling to California this weekend to face the Ontario Reign and San Diego Gulls on back-to-back nights. The first game is Friday, March 12 at 7:00pm MST against Ontario. Ontario is last in the AHL with a 1-10-2-0 record, whereas San Diego is in second with a 9-5-0-0 record.

Play Along With Us At Home
Roadrunners Play, an interactive fan experience, launched last weekend during the home series with Texas. Fans can play along at Roadrunnersplay.com and make their predictions for a chance to win one of several Roadrunners-themed prizes.

Around the Pacific Division
This weekend features a heavy slate of AHL Pacific Divison matchups, with six of the seven teams in play on Friday, with all seven on the Ice Saturday. The San Jose Barracuda travel to Bakersfield to face the Condors, while Henderson will be matching the Roadrunners pair of games with Ontario and San Diego the following nights. Meanwhile, Colorado will be in Texas taking on the Stars. Three teams are all tied for third in total points with ten (San Jose, Colorado and Tucson).

Did You Know?
Tucson Roadrunners forward Kevin Hancock became the eight Roadrunners skater to record a multi-point performance Saturday night versus Texas, and only the fifth to do so with multiple goals. Hancock had both of Tucson’s goals, good for his first two scores of the season.