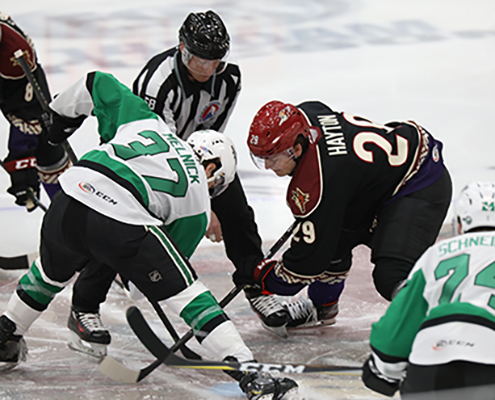 Tucson, Arizona – The Tucson Roadrunners completed their three-game home series with the Texas Stars Saturday night. Saturday night was the first of several games this season to be televised on the Tucson CW. Tucson suffered a 4-2 loss to Texas but led in total shots on goal and scoring chances.

Tucson outshot the Stars throughout the first period but couldn’t capitalize on any of their chances. Texas found the back of the net late into the period, to give them a 1-0 lead heading into the first intermission. The second period brought more action than the first, as Texas added two goals three minutes apart. Tucson got on the board with a minute left in the period, as Kevin Hancock recorded his first goal of the season. Tucson cut the lead to one in the third period, as Kevin Hancock notched his second goal of the game. Hancock finished the game with a pair of goals in only his second appearance of the season. Tucson had some good looks but couldn’t find the back of the net again. An empty net tally by the Stars put the game away and secured the win for Texas Saturday night. Adin Hill was once again in net for the Roadrunners, on a conditioning loan from the Arizona Coyotes, making 20 saves in his second straight start.

The Roadrunners head out on a two-game California road trip with the Ontario Reign and San Diego Gulls. Their next game is Friday, March 12, versus the Reign in Ontario, at 7:00pm MST. You can listen to the game in Tucson on FOX 1450 AM and on the iHeart Radio app or watch the game on AHL TV.

“Our energy and the way we connected the dots today was really good. We play like, we’ll be tough to beat. Tonight was one of our first real sixty-minute games we’ve played.”

Roadrunners head coach Steve Potvin after the game on the team’s performance Saturday night in the series finale with Texas.

The Tucson Roadrunners donned their alternate Kachina jerseys for the first time this season Saturday night. The Roadrunners will be sporting five different uniforms throughout the season, including the fifth anniversary and El Lazo jerseys.

Tucson Roadrunners’ Road Ahead: Week of March 8
Scroll to top