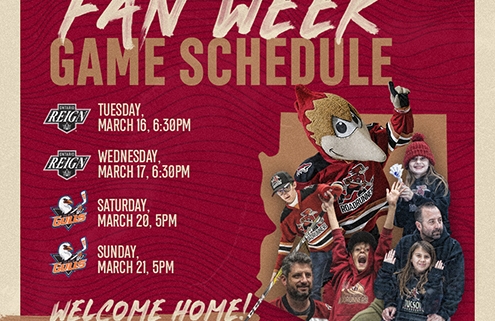 Tucson, Arizona – The Tucson Roadrunners, owned and operated by the Arizona Coyotes, announced today their excitement for welcoming fans back to Tucson Arena beginning with the team’s next home stand that will start on Tuesday, March 16 against Ontario at 6:30 p.m.

The announcement was made on The CW Tucson just prior to tonight’s face-off against Texas at Tucson Arena.

The team has received approval from the Pima County Health Department to begin by hosting 650 fans-per-game, 10% of the Tucson Arena’s capacity for hockey.

The Roadrunners would like to thank all of their fans and specifically their season ticket members and corporate partners for their loyalty to the team during the pandemic.  As a celebration of that loyalty, the Roadrunners introduce ‘Fan Week’ which will run between March 16 and March 21 when the team will host four games in six nights.  Follow the Roadrunners social media channels for contests and promotions with numerous prizes and memorabilia items available throughout ‘Fan Week” and don’t miss Roadrunners Play, presented by Casino Del Sol, as the new exciting way to stay engaged during all Roadrunners games.

“The Roadrunners are proud to be the first pro sports organization in Tucson to invite spectators back to live events,” said Roadrunners President Bob Hoffman. “Our entire focus for the last several months has been developing and implementing an approved plan to return fans safely to our games. We thank Pima County, the City of Tucson, Rio Nuevo, Visit Tucson and Tucson Arena for their support and assistance throughout this process.”

The Roadrunners plan submitted to the Pima County Health Department includes: social distanced seating, specific entry and entrances based on section and strictly follows all health and safety guidelines currently in place. All arena attendees will be required to comply with the policies and procedures.