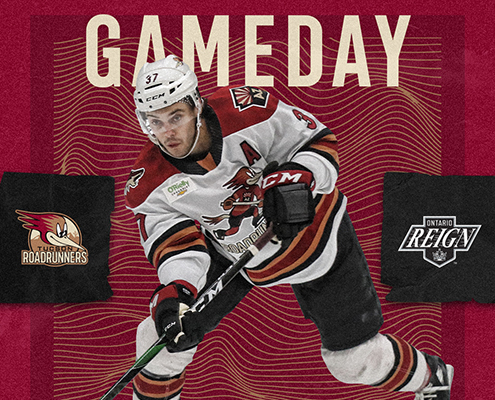 The Tucson Roadrunners travel to the Toyota Sports Performance Center for the final time this season, to face off with the Ontario Reign Friday night. Puck drop is set for 6:00 p.m., for the sixth of eight total meetings between these two teams this season. Ontario has the advantage in the head-to-head record three games to two, but Tucson will be eager to even it up win the win Friday night.

Three Things
1) The Tucson Roadrunners have a pair of familiar foes on the schedule this weekend in California, in the form of the Ontario Reign and San Diego Gulls. Tucson’s last six games have been against either of these two squads, and their schedule this weekend is exactly the same as their road trip two weekends ago. Tucson will be taking on the same teams, in the same arenas, at the same time, on the same days of the week as they did March 12 and 13 in El Segundo and Irvine.

2) Roadrunners forward Barrett Hayton has been heating up as of late. The twenty-year-old recorded three assists in Tucson’s last two games, including assists on two power-play goals by Michael Bunting on Sunday. Hayton scored his first goal of the season Tuesday, March 16, versus the Roadrunners next opponent, the Ontario Reign.

3) With the Arizona Coyotes dealing with injuries at the goaltender position, they have had to call upon Roadrunners all-time leader in wins Adin Hill to start in net, with Ivan Prosvetov serving as his backup. Hill played a key role in Arizona’s 5-4 shootout win over the Colorado Avalanche on Tuesday in Glendale. Hill stopped 35 shots on goal, along with denying Avalanche star Nathan MacKinnon in the shootout, to give the Coyotes the win.

What’s The Word?
Tucson Roadrunners forward Ryan McGregor on where the team stands in regards to their recent performances, and how they will move forward heading into the pair of games this weekend in California:

“Our team’s obviously had some ups and downs, but we’ve liked a lot of the stuff we’ve been doing the past couple of games, we just have to clean up some things that have been killing us.”

Number to Know
5 – The number of power-play goals Roadrunners forward Michael Bunting has on the season, which leads the AHL. Tucson has found much of their scoring success on the man advantage, especially against Ontario. Look for the Roadrunners to be aggressive when on the power-play Friday night against the Reign.

We’re Doing It Live
Roadrunners Hockey returns to the radio today at 6:00 p.m. as “Voice of the Roadrunners” Adrian Denny brings you all of the action on Fox Sports 1450 AM. All Roadrunners games are broadcast live on Tucson’s Sports Station, along with AHLtv.