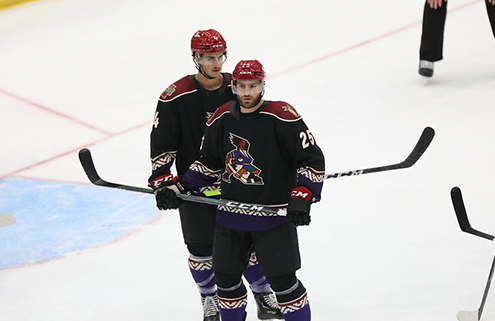 Who’s on the Schedule
The Tucson Roadrunners will be back on the road for a repeat of last weekend’s California road trip against the Ontario Reign and San Diego Gulls. The Roadrunners are a combined 4-4 against these two squads on the season and have faced one of these teams in each of their last six games. They’ll face the Reign first on Friday, March 26 at 6 p.m. MST. You can listen to the game in Tucson on FOX Sports 1450 AM and on the iHeart Radio app or watch the game on AHL TV.

Come See Us Live
The Roadrunners return home Wednesday, March 31, for the first of three games with the Henderson Silver Knights at the Tucson Arena. Limited single-game tickets are available to purchase at TucsonRoadrunners.com/WelcomeBack. This year marks Henderson’s first year in the AHL, and Tucson will be looking to start off the head-to-head record in their favor with a series win against the Silver Knights.

Hayton Heating Up
Tucson Roadrunners forward Barrett Hayton recorded three assists in the two weekend games with the San Diego Gulls, including assists on each of Michael Bunting’s power-play goals on Sunday. Hayton has appeared in the last twelve games for the Roadrunners, and recorded his first goal of the season Tuesday, March 16 versus the Ontario Reign.

Ivan is Back
Goaltender Ivan Prosvetov is back with the Tucson Roadrunners after a stint up in Glendale with Arizona Coyotes. Prosvetov, who started the first six games for the Roadrunners this season, made his return to game action Sunday night against San Diego. He stopped 34 shots, including some key saves on breakaways and odd-man rushes to keep the Roadrunners in the game early on.

Did You Know?
Tucson Roadrunners standout Michael Bunting scored two power-play goals Sunday night versus the San Diego Gulls, making him the sole leader for power-play goals throughout the AHL. Bunting, who is the all-time franchise leader in games played, goals and points, is currently third in the AHL in total points with 19. He played all 58 games for the Roadrunners last season and has appeared in all 16 games this season.

Play Along With Us At Home
Roadrunners Play, an interactive fan experience, goes live for every Tucson Roadrunners game. Fans can play along at Roadrunnersplay.com and make their predictions for a chance to win one of several Roadrunners-themed prizes. Sunday featured 50 different winners, as a conclusion to Fan Week. The top winners received prizes from Casino Del Sol, including room nights and dining credits.

Around the Pacific Division
While the Roadrunners won’t take the ice until Friday night against Ontario, there will be plenty of AHL Pacific Division action this week. The other six teams in the division will all face-off on Wednesday, March 24, with San Jose visiting Bakersfield, San Diego taking on Ontario, and Colorado clashing with Henderson.

Our Next TV Appearance
The Roadrunners will be back on The CW Tucson for their third televised game of the season Saturday, April 3. “Voice of the Roadrunners” Adrian Denny will be joined on the broadcast by Alex Kinkopf from ArizonaCoyotes.com, as they take on the Henderson Silver Knights at the Tucson Arena.