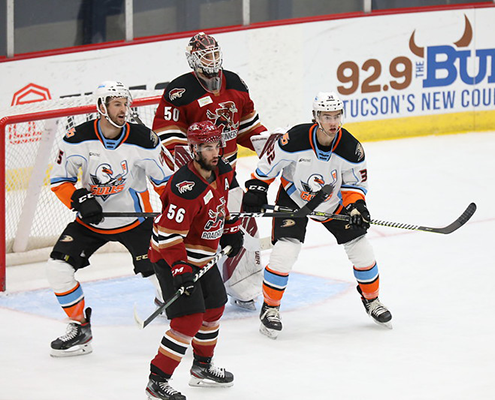 Tucson, Arizona – The Tucson Roadrunners wrapped up Fan Week Sunday night, in their second straight matchup with the San Diego Gulls in Tucson. The Roadrunners struck first in the contest, but ultimately suffered a 4-2 loss, their first against San Diego of the season.

After Saturday night’s matchup between these two teams featured a combined six goals, the first period Sunday night featured a whopping zero goals between the San Diego Gulls and Tucson Roadrunners. Both teams went on the power-play only once, and neither could capitalize on the opportunity. Tucson was able to fix that in the second period, with Michael Bunting cashing in Tucson’s first power-play of the period, giving the Roadrunners a 1-0 lead with 16:30 still to play in the middle period. It was Bunting’s sixth goal of the season, and Kyle Capobianco’s eighth assist, the most by a Roadrunners defenseman this season. Bunting reiterated his power-play talent later on in the period, securing his second goal of the night on the man advantage. Barrett Hayton picked up assists on both of the goals, recording his first multi-point performance of the season. San Diego got on the board in the waning minutes of the second period, as Gulls Captain Sam Carrick lit the lamp, assisted by his brother Trevor Carrick. The score would stand at 2-1 in Tucson’s favor heading into the final period of action. San Diego tied the game early on in the third period, as Sam Carrick found the back of the net for the second time on Sunday for San Diego. The Gulls took their first lead of the night with a goal by Josh Mahura four minutes and twelve seconds after Carrick’s equalizer. An insurance goal late in the third by Benoit-Olivier Groulx put the game away for the Gulls. Ivan Prosvetov, back with Tucson after a stint with the Arizona Coyotes started in net Sunday night for the Roadrunners. In his return to game action, Prosvetov made 34 saves, his most in a game since February 26 against the Colorado Eagles.

The Roadrunners take some time off before they head out on the road for a repeat of last weekend’s California road trip against the Ontario Reign and San Diego Gulls. They’ll face the Reign first on Friday, March 26 at 6 p.m. MST. You can listen to the game in Tucson on FOX Sports 1450 AM and on the iHeart Radio app or watch the game on AHL TV.

“It’s a collective effort. I thought Ivan made some great saves tonight and he kept us in the game. I felt like we just needed to be better and stronger on sticks and defend the blue line harder than we did. We’ll have to watch the video and find ways to sort it out and get back to our structure and details.”

Tucson Roadrunners Head Coach Steve Potvin after the game on his takeaways from Sunday night’s 4-2 loss to the San Diego Gulls.

HAYTON HELPS OUT – Tucson Roadrunners forward Barrett Hayton recorded an assist on each of Tucson’s two goals, each of which were scored by Michael Bunting on the power-play in the second period. Hayton becomes the twelfth Roadrunners player this season to record a multi-point outing.

Watch Tucson Roadrunners standout Michael Bunting’s pair of power-play goals Sunday night against the San Diego Gulls. Both of Bunting’s scores came in the second period, and Barrett Hayton recorded an assist on each of them. Bunting now leads the AHL in power-play goals with five and is now third for total points with 19.

Ivan Prosvetov returned to the Tucson Roadrunners roster after being assigned by the Arizona Coyotes Sunday and started that night in net for Tucson. Prosvetov made 38 saves in his first action in a Roadrunners uniform since March 3 against the Texas Stars. To replace Prosvetov up in Glendale, David Tendeck was called up to the Coyotes Taxi Squad.

Tucson Roadrunners’ Road Ahead: Week of March 22, 2021
Scroll to top