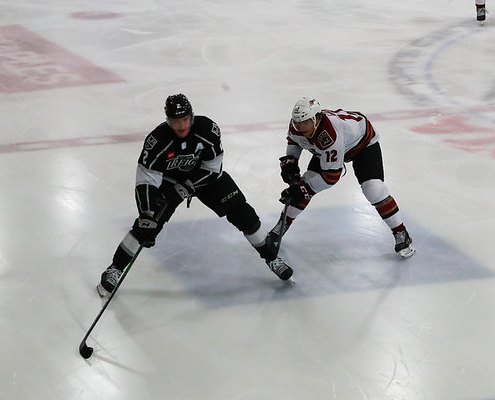 TUCSON ROADRUNNERS FORCE OVERTIME, PICK UP A POINT IN LOSS TO ONTARIO REIGN

El Segundo, California – The Tucson Roadrunners fought hard in Friday night’s contest with the Ontario Reign, coming back from a 2-1 deficit late to force overtime, but ultimately fell to the Reign in the extra period by a score of 3-2.

Tucson jumped out to an early 1-0 lead off the stick of Nate Sucese, his third goal of the season. Ontario answered back a few shifts later to even the score at one after the first five minutes of play, Sean Durzi had his third score of the season for Ontario. Neither team would score for the next 37:47, until Lias Andersson gave the Reign a 2-1 lead early on in the third period, with his second goal of the year coming shorthanded. With the Roadrunners needing a goal late, forward Josh Wilkins gave them just that, scoring the equalizing goal with 3:19 left in regulation on the power-play. It was his first goal of the season and came in the clutch to send the game to overtime. With nearly a minute left on the clock in the extra period, the Ontario 3-man unit took the puck from end to end to score the deciding goal, handing the Roadrunners their first overtime loss of the season, by a score of 3-2. Connor LaCouvee started in net for the Roadrunners and stopped 21 shots on goal.

The Roadrunners take the short drive from Los Angeles to Orange County, to face the San Diego Gulls Saturday night at 7 p.m. MST. You can listen to the game in Tucson on FOX Sports 1450 AM and on the iHeart Radio app or watch the game on AHL TV.

“We played a great team game. The boys fought back tonight, I thought they played a full game and battled ‘till the end. It was good to see the special teams pull through.”

Tucson Roadrunners Head Coach Steve Potvin after the game on his team’s performance in Friday night’s overtime loss to Ontario.

DON’T OVERLOOK IT
ROADRUNNERS REGULARS RECALLED – Tucson Roadrunners leaders Michael Bunting and Lane Pederson were both called up to the Arizona Coyotes this weekend, prior to their series with the San Jose Sharks. Bunting and Pederson combined for 14 of the Roadrunners 45 total goals this season prior to tonight, along with six of the nine power-play goals. Both players were in the top seven in the AHL in points.

Watch Tucson Roadrunners forward Josh Wilkins bury the puck for his first goal of the season during the third period of Friday night’s matchup with the Ontario Reign. Wilkins is in his first season with the Roadrunners, after having spent his rookie season last year with the Milwaukee Admirals.

Forward Frederik Gauthier returned to the Tucson Roadrunners roster Friday night, for his second game of the season with the Roadrunners. Gauthier was assigned to Tucson Thursday afternoon, corresponding with Roadrunners veteran Lane Pederson being called up to Glendale. Gauthier spent three seasons in the AHL from 2015-2018 with the Toronto Marlies, recording as many as 18 points in a season.