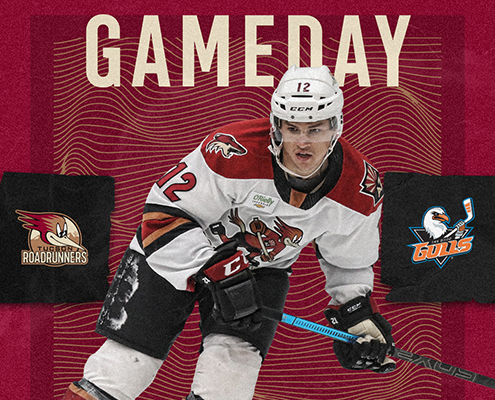 The Tucson Roadrunners wrap up their California road trip with a rematch with the San Diego Gulls Saturday night, at FivePoint Arena at Great Park Ice at 7:00 p.m. The Roadrunners earned a point Friday night in an overtime loss to the Ontario Reign, and will look to come home with multiple points after a win in Irvine.

2) Roadrunners leaders Michael Bunting and Lane Pederson were both called up to the Arizona Coyotes this weekend, prior to their series with the San Jose Sharks. Bunting and Pederson have combined for nearly a third of the Roadrunners total goals prior to this weekend, along with two-thirds of the team’s power-play goals. Both players were in the top seven in the AHL in points, with Michael Bunting leading the AHL in power-play goals with five.

3) Tucson Roadrunners forward Josh Wilkins scored his first goal of the season in Friday night’s matchup with the Ontario Reign at the Toyota Sports Performance Center in Los Angeles. The goal came on the power-play with 3:19 left in regulation and sent the game to overtime. Wilkins is in his second AHL season and recorded fifteen points last year with the Milwaukee Admirals.

What’s The Word?
Tucson Roadrunners defenseman Dysin Mayo on the Roadrunners having to stick to and execute the game plan for each game:

“I think we’re playing the right way, but it just has to be about sticking to the game plan and the system.”

Number to Know
37 – The number of minutes in between goals in Tucson’s game versus the Ontario Reign Friday night in Los Angeles. The game featured two goals within the first four and a half minutes of the first period but didn’t see another score until two minutes into the third period. Nate Sucese opened the scoring for the Roadrunners in the first, and Josh Wilkins tied up the score late to send the game to overtime.