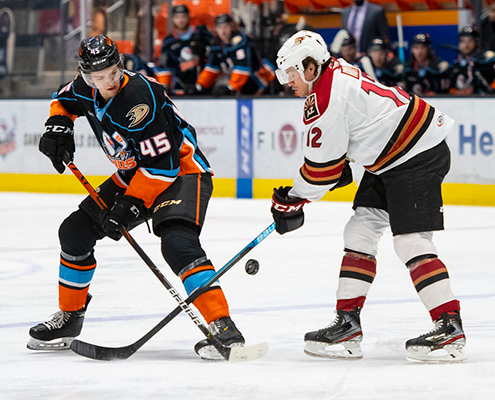 TUCSON ROADRUNNERS BATTLE AGAINST PENALTIES AND TURNOVERS, FALL TO GULLS 2-1 IN ORANGE COUNTY

Irvine, California – The Tucson Roadrunners fought for a full sixty minutes Saturday night against the San Diego Gulls in Orange County, but in the end couldn’t overcome some early turnovers and time spent on the penalty-kill to suffer a 2-1 loss. Kevin Roy had the lone goal for the Roadrunners against his former team, his ninth score of the season.

It took nearly the entire first period for a puck to find the back of the net, but when it happened, it was for the Roadrunners. Kevin Roy poked the puck past San Diego goaltender Olle Eriksson Ek for his ninth goal of the season, and his second power-play goal of the year. It was Roy’s second goal against his former team, and fifth point overall. The Roadrunners were knocking on the door for much of the second period, but a costly turnover in the Tucson zone gave the Gulls their first goal of the night, tying the game at one midway through the middle frame. The goal was Tucson’s first five-on-five goal allowed in nearly 95 minutes of game time. Both teams had quality scoring chances, but excellent goaltending by Tucson’s Connor LaCouvee and San Diego’s Olle Eriksson Ek kept the score knotted at one heading into the third period. San Diego took their first lead of the night roughly nine minutes into the final frame, as Matt Lorito found the back of the net from the face-off circle to give him a multi-point performance for the Gulls. The Roadrunners fought through several penalties, going a perfect four-for-four on the night, but it wasn’t enough as the Roadrunners came up short, falling to the Gulls by a final score of 2-1. Connor LaCouvee started his second straight night for the Roadrunners, stopping 27 of 29 shots in Saturday night’s contest. The Roadrunners end the weekend with a 7-10-1-0 record, while the Gulls improve to 13-10-0-0 on the season.

The Roadrunners return home to face the Henderson Silver Knights for the first time in franchise history. Game one in their three-game set is on Wednesday, March 31 at 6:30 p.m. MST. You can listen to the game in Tucson on FOX Sports 1450 AM and on the iHeart Radio app or watch the game on AHL TV.

“We’ve been putting great minutes and a lot of successful sequences together. We simply cannot afford to take a single play or scenario off. We will re-commit to the process and each other and continue to find ways to find yet another level in our game, both as individuals and as a team. We’ve been competing every night. This is a great learning experience for everyone testing our mental stamina and depth of inner competition.”

Tucson Roadrunners Head Coach Steve Potvin after the game on how the team will move forward into the second half of the season after picking up a point in two games this weekend on the road.

Watch Tucson Roadrunners forward Kevin Roy score his team-leading ninth goal of the season in Saturday night’s contest with the San Diego Gulls, assisted by Cameron Hebig and Frederik Gauthier. The 27-year-old spent his first four seasons in the AHL with the San Diego Gulls, scoring as many as sixteen goals in a season for the Roadrunners I-8 rivals.

Tucson Roadrunners defenseman Victor Soderstrom races a San Diego skater for the puck in during Saturday night’s I-8 rivalry match. Born in 2001, Soderstrom is the youngest member of the Roadrunners roster, and is in his first season with the team after being selected eleventh overall by the Arizona Coyotes in the 2019 NHL Entry Draft.