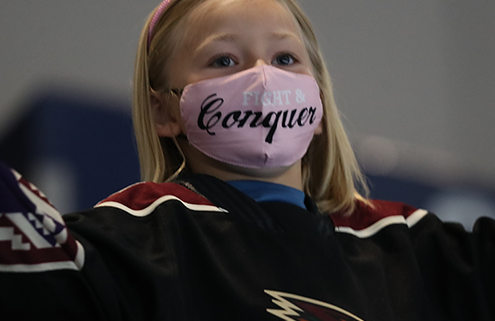 Tucson, Arizona – The Tucson Roadrunners, owned and operated by the Arizona Coyotes have announced that social distanced arena capacity at Tucson Arena will increase to 1,150 fans starting with Friday’s game against Henderson at 7 p.m.

The Roadrunners previously welcomed 650 fans-per-game, or ten-percent of arena capacity for hockey for games on March 16, 17, 20 and 21. 1,150 fans is approximately 18-percent of Tucson Arena capacity. Tucson will open a five-game home stand Wednesday at 6:30 p.m. with 650 fans.

“We were extremely pleased with the game day experience at our last four games,” said Roadrunners President Bob Hoffman. “Along with the Tucson Arena, City of Tucson and Pima County Health Department, we have decided that we still will be able to maintain all health and safety standards with this increased capacity. We thank our fans for their cooperation. It has taken everyone coming together to be one of the few AHL teams to have welcomed fans back to the arena. We know our team will once again be boosted by this additional home ice advantage. They are very excited about this news.”

Fans will still be required to wear face coverings at all times in the arena unless actively eating or drinking, have their temperature taken upon entering the arena and be required to fill out an online pre-health screening form prior to arriving at the arena.

Fans are encouraged to follow the team on Facebook, Instagram and Twitter while also regularly visiting TucsonRoadrunners.com or more information on how to attend games LIVE.  In addition, the entire Roadrunners season is available on AHL-TV, presented by AMR (CLICK HERE for more information), and select games are available on The CW Tucson, the television home of the Roadrunners (CLICK HERE for the entire TV schedule).

Tucson Roadrunners’ Road Ahead: Week of March 29, 2021
Scroll to top