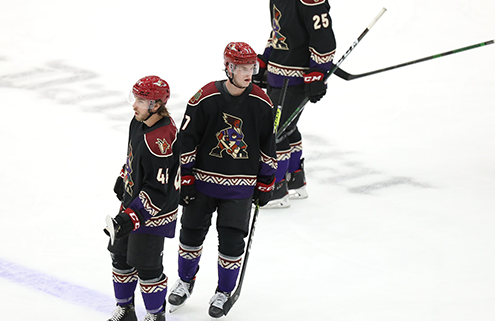 Increased Capacity Update
The Tucson Roadrunners have announced that social distanced arena capacity at Tucson Arena will increase to 1,150 fans starting with Friday’s game against Henderson at 7 p.m. This is up from the previous limit of 650 fans per game, and 1,150 is approximately 18-percent of Tucson Arena capacity. All current health and safety guidelines will remain in place at games including: social distanced seating, specific entry and entrances based on section and strictly follows all health and safety guidelines currently in place. Available tickets for games on games on Friday, April 2; Saturday, April 3; Friday, April 9 and Saturday, April 10 will go on sale Tuesday at 12 p.m. at TucsonRoadrunners.com/WelcomeBack.

Who’s on the Schedule
The Tucson Roadrunners will be back in Southern Arizona this week for a three-game series with the Henderson Silver Knights. It is Tucson’s first time playing the Silver Knights in franchise history. Henderson comes into town sitting atop the AHL Pacific Division with a 15-3 record, along with a division-leading +26 goal differential and a two-game winning streak.

Potent Penalty-Kill
The Roadrunners have been steadfast on the penalty-kill this season, going sixty-two for seventy while on the disadvantage this season, good for second-best in the entire AHL. Tucson has been perfect on the penalty-kill in away games dating back to February 12, and 41 for 43 on the road overall. Their eight power-play goals allowed is lowest in the Pacific Division and tied for third lowest throughout the league.

Power-Play Prevailing
The Roadrunners went a solid two-for-six on the power-play this weekend in California, with goals on the man advantage by Josh Wilkins and Kevin Roy. Prior to this weekend, Roadrunners leaders Michael Bunting and Lane Pederson had combined for two-thirds of the team’s overall power-play goals. With both of them up in Glendale with the Arizona Coyotes this weekend, the power-play units for Tucson seemingly didn’t miss a beat, producing a clutch goal in the third period against the Ontario Reign that sent the game to overtime, and earned a Roadrunners a hard-earned point in the standings.

Next Man Up For Netminder
With Roadrunners regular goaltenders Adin Hill and Ivan Prosvetov filling in for the Arizona Coyotes as of late, Roadrunners goalie duties have been primarily placed on Connor LaCouvee. In seven starts this season, LaCouvee has averaged 2.58 goals allowed per game, and has given up two goals or less in five of the seven appearances. LaCouvee has conceded only one five-on-five goal or less in four of his seven starts.

Did You Know?
Roadrunners standout Kevin Roy scored his team-leading ninth goal last Saturday against his former team, the San Diego Gulls. In his first year with Tucson, Roy is currently fifth in the AHL in goals, and the leading scorer overall on Tucson’s roster with Michael Bunting and Lane Pederson up with the Arizona Coyotes. Roy has multiple goals against four different teams this season, with two goals against Ontario, Texas, Colorado and San Diego.

Around the Pacific Division
While the Roadrunners are busy clashing with the Henderson Silver Knights in the Old Pueblo this week, the rest of the AHL Pacific Division will be relatively quiet. The Bakersfield Condors and Colorado Eagles will face-off in a battle between birds on Friday and Saturday in Loveland. Meanwhile, the San Jose Barracuda will take on three different opponents in a span of eight days beginning Tuesday when they also take on the Condors, followed by contests with the San Diego Gulls Saturday, and the Henderson Silver Knights Tuesday.

Our Next TV Appearance
In addition to all three games this week being broadcast on Fox Sports 1450 AM and AHLtv, the Roadrunners will be back on The CW Tucson for their third televised game of the season Saturday, April 3. “Voice of the Roadrunners” Adrian Denny will be joined on the broadcast by Alex Kinkopf from ArizonaCoyotes.com, as they take on the Henderson Silver Knights at the Tucson Arena.