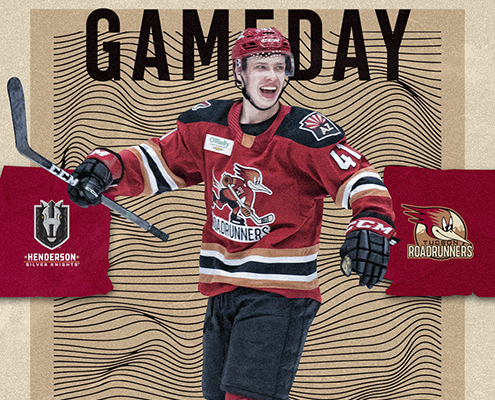 The Tucson Roadrunners return home for a five-game stretch at the Tucson Arena this week, with their first game being Wednesday, March 31 against the Henderson Silver Knights. Tucson will clash with the Silver Knights three times before the San Diego Gulls come to town for a pair of games next weekend.

Three Things
1) The Tucson Roadrunners take on the Henderson Silver Knights for the first time in franchise history Wednesday night, and will look to start the all-time head-to-head record off with a win. The Silver Knights ride into town with a Pacific-Division best 15-3 record and a +26 goal differential. Henderson is the only other team in the division hosting fans in their arena and have a two-game win streak that came in front of their home crowd at the Orleans Arena in Las Vegas.

2) The Roadrunners went two-for-six on the power-play last weekend in their pair of games against the Ontario Reign and San Diego Gulls. Top power-play performers Michael Bunting and Lane Pederson, who had combined for two-thirds of the team’s power-play goals this season, were up with the Arizona Coyotes, meaning the Roadrunners needed other players to step up and produce on the man advantage. That’s exactly what happened, as Josh Wilkins and Kevin Roy each cashed in with special teams scores. Wilkins’ goal came in the final minutes of regulation against Ontario, and sent the contest to overtime, earning the Roadrunners a point in the standings. Roy’s goal came against his former team, the San Diego Gulls, and gave him his team-leading ninth goal.

3) The Tucson Roadrunners have have announced that social distanced arena capacity at Tucson Arena will increase to 1,150 fans starting with Friday’s game against Henderson at 7 p.m. This is up from the previous limit of 650 fans per game, and 1,150 is approximately 18-percent of Tucson Arena capacity. All current health and safety guidelines will remain in place at games including: social distanced seating, specific entry and entrances based on section and strictly follows all health and safety guidelines currently in place. Tickets are available for the current homestand at TucsonRoadrunners.com/WelcomeBack. The Roadrunners will also be unveiling their new “El Lazo” identity for their game Friday against Henderson.

What’s The Word?
Tucson Roadrunners forward Cameron Hebig on building off of the positives from last weekend’s pair of games to take on a formidable foe in the Henderson Silver Knights this week:

“I think we played some good hockey [last weekend], but this is a new week now, so we’re looking to build off of what we did. I think we’re all hungry, and there’s obviously a good team in Henderson coming in, we just have to be ready and be prepared.”

Number to Know
9 – The number of goals Roadrunners first-line forward Kevin Roy has scored this season, which leads the team and is tied for fifth in the entire American Hockey League. Roy, playing in his sixth AHL season, is averaging nearly a point a game and has anchored the top forward line this season. Roy played in his 200th career AHL game last Friday night against the Ontario Reign.