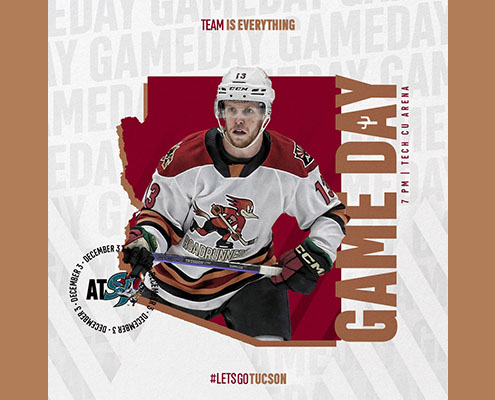 The 10-6-1-0 Tucson Roadrunners open a two-game weekend set with the San Jose Barracuda Saturday night at the Tech CU Arena in San Jose. The series will mark Tucson’s final trip to the Bay Area this season and the final two games on their five-game road trip across California. The Roadrunners enter the weekend with the AHL affiliate of the San Jose Sharks having won two of their first three outings on the road trip, while the Barracuda are coming off a pair of midweek matchups with the Iowa Wild Tuesday and Wednesday to kick off a six-game home stand. The Wild won both games in San Jose by scores of 4-3 and 5-3.

Three Things
1) The Roadrunners and Barracuda will be facing off for the fifth and sixth times this season over the weekend series in San Jose. Tucson currently holds the advantage in the season series three games to one. After this weekend, the Roadrunners and Barracuda won’t face off again until the final two games of the 2022-2023 regular season at the Tucson Arena April 14 and 15. The Roadrunners have also won both previous series openers against San Jose this season, outscoring the Barracuda in those contests 11 to four.

2) The weekend series with the Barracuda this weekend represents the final two contests on Tucson’s current five-game road trip across California. The Roadrunners won two of their first three games on the trip, with back-to-back 3-1 victories over the San Diego Gulls and Ontario Reign. Over their three games last week, the Roadrunners tallied a pair of multi-goal periods as well as a pair of power-play strikes. Forward J.S. Dea enters the weekend with goals in each of his last three outings, the longest goal streak by a Roadrunner this year. In addition, Tucson goaltenders Ivan Prosvetov and Jon Gillies have combined for a .935 save percentage with just six goals allowed on the current trip. Their combined save percentage on the trip would be the second-best individual percentage in the American Hockey League among qualified goaltenders.

3) The Roadrunners spent the practice week between games in California back home in Tucson where they were also spotted in several appearances throughout the week in the community. To kick off the Holiday Season, five Roadrunners attended Tuesday’s VIP Dinner for Dusty’s Force Season Ticket Members. The next afternoon, four Tucson skaters aided in the team’s Adopt-A-Street Cleanup of Alameda Street. Finally, Roadrunners players took the ice at the Tucson Arena Wednesday and Thursday night to practice with the Jr Roadrunners. There will also be a plethora of community events to feature Roadrunners players when the team returns from San Jose, including an opportunity to skate with select players at the Holiday Ice Rink outside the Tucson Arena on Tuesday, December 6 from 6 p.m. to 7 p.m. The team will also be present at the Season Ticket Member Holiday Party at the Tucson Arena on Wednesday, December 7. Rounding out the week of events before the Roadrunners return to their home ice to face the Ontario Reign is a DEK Hockey Workshop at the Boys & Girls Club on Grant Road on Thursday, December 8 at 4 p.m. that will feature select players. Along with Tucson players appearing in the community, Saturday’s series opener could feature the anticipated Roadrunners debut of newly acquired forward Curtis Douglas. The six-foot-nine 22-year-old was acquired by the Arizona Coyotes last month from the Toronto Maple Leafs. Douglas has appeared in 13 games this season with the AHL’s Toronto Marlies, where he tallied 34 points (13g 21a) in 67 outings last year. The 2018 Fourth-Round Draft Pick will become the tallest player in Roadrunners history, a record previously held by three players at six-foot-six. In addition, forward Colin Theisen has been assigned to the ECHL’s Atlanta Gladiators.

“When you can come out with a winning percentage like that going out on the road, it’s huge for the team. We’re always looking to be road warriors, it’s tough to play on the road in other team’s barns. 2-1 is a great record for us.”

Tucson defenseman Cam Crotty on the Roadrunners strong start to their current road trip, with back-to-back wins over the San Diego Gulls and Ontario Reign.

Number to Know
4 – The Roadrunners have scored four goals or more in three of their four meetings with the San Jose Barracuda this season. This includes 5-1 and 6-3 wins in their previous series openers with the Barracuda, representing two of Tucson’s five games this season with five or more goals scored. The Roadrunners 6-3 win over San Jose on Saturday, November 19 matched a season high for goals in a contest this season, which was set the game before on Wednesday, November 16 against the Henderson Silver Knights.

We’re Doing It Live
Tonight’s game will be broadcast live on AHLtv, as well as on the radio at FOX Sports 1450AM and the iHeartRadio app. Coverage will begin at 6:45 p.m. with Roadrunners Warm-Up hosted by Jimmy Peebles, before “Voice of the Roadrunners” Adrian Denny has all the action from the Tech CU Arena.