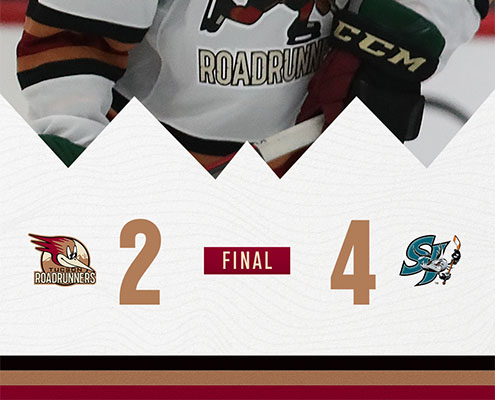 San Jose, California – The Tucson Roadrunners began a two-game set with the San Jose Barracuda Saturday night at the Tech CU Arena, as the two teams met for the fifth time this season. The Roadrunners led for 32:28 of the contest before the Barracuda netted three power-play goals to come away with a 4-2 victory on their home ice, moving Tucson to 10-7-1-0 on the season. Roadrunners goaltender Jon Gillies was perfect for the first 38:17 of the night and finished with 32 saves, while Captain Adam Cracknell notched a multi-point night with assists on both Tucson goals.

Forward Jan Jenik put Tucson up 1-0 with 5:49 gone by in the first period of Saturday’s road contest with the San Jose Barracuda. The goal was Jenik’s third of the season, with all three coming while on the road. The 22-year-old’s score was assisted by defenseman Victor Soderstrom (9) and forward Adam Cracknell (4). Cracknell tallied assists on each of Tucson’s two goals on Saturday for the Captain’s second multi-assist outing of the year (October 23).

THE STREAK SURVIVES – Tucson forward J.S. Dea lit the lamp with 1:31 remaining in the third period of Saturday’s series opener with the San Jose Barracuda. The goal gave Dea his fourth-straight outing with a goal scored, the longest streak by a Roadrunner this season. The score also marked the 28-year-old’s tenth time finding the back of the net this season, which leads the team in his first year as a Roadrunner.

Roadrunners forward Jan Jenik opened the scoring Saturday night with the fastest goal to start a matchup between Tucson and San Jose this season. The score was Jenik’s third of the season, as the 22-year-old now has 11 points (4g 7a) in 14 career games against the Barracuda. Jenik made his AHL and NHL debuts in 2021 against teams based in San Jose, with his first career goals at both levels coming against the Barracuda and Sharks, respectively.

“When we’re able to play five-on-five and stay fresh, we’re a hard team to play against. The strength of our team is four lines of five-on-five. We need to [be able to] keep that momentum going.”

Saturday’s series opener began with an early score by Tucson for their third time lighting the lamp first through four games on their current road trip. Forward Jan Jenik took a pass from defenseman Victor Soderstrom and fired it past San Jose backstop Strauss Mann for his third goal of the season and a 1-0 Roadrunners advantage. With just 5:49 gone by in the opening frame, the goal was the fastest score by either team in five meetings this season. The remainder of the first period was without another score, as Jon Gillies stopped all six shots faced and Tucson carried their one-goal lead into the second period of play. Gillies continued to keep the Barracuda off the scoreboard on their Teddy Bear Toss night through the first 18:17 of the second period, before a power-play goal by San Jose sent the teams to an early second intermission with the score tied at 1-1. Another goal while on the man-advantage for San Jose in the remaining 1:43 of the middle period gave the Barracuda their first lead of the night at 2-1, as the Roadrunners trailed entering the final 20 minutes of play. San Jose netted a third-straight power-play strike just past the midway point of the third period for the first multi-goal lead of the contest at 3-1. The goal came in the final 12 seconds of a five-minute major penalty on the Roadrunners, who continued to have the only even-strength goal of the game. That changed in the final 2:50 of regulation with another San Jose goal, their first five-on-five score of the night. Tucson was able to light the lamp once again with an extra attacker late in the period, as J.S. Dea scored his tenth goal of the season for his fourth consecutive outing with a goal. Dea’s goal with 1:31 remaining was the final score of the contest, as the Roadrunners fell to the Barracuda by a count of 4-2. Tucson and San Jose will wrap up the two-game set Sunday afternoon at 4 p.m. MST with their last meeting until the final weekend of the regular season.