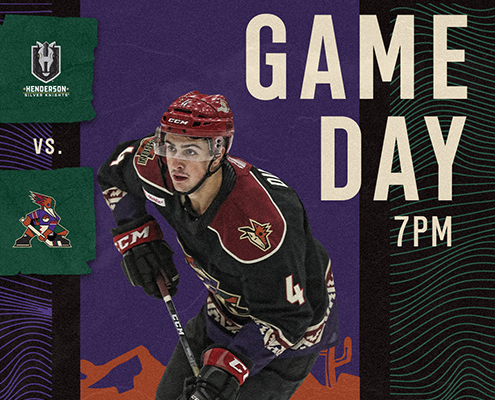 The Tucson Roadrunners wrap up their first-ever series with the Henderson Silver Knights Saturday night, with a recently increased audience of 1,150 fans in attendance. Puck drop is at 7:00 p.m. MST at Tucson Arena. The game will be broadcast live on The CW Tucson, where “Voice of the Roadrunners” Adrian Denny and Alex Kinkopf of ArizonaCoyotes.com will have the call.

Three Things
1) Friday night marked the debut of the Tucson Roadrunners new “El Lazo de Tucson” identity. The team donned their new uniforms, while presenting a gameday experience that took inspiration from and honored Hispanic heritage, along with the rich history and culture of the City of Tucson. The Tucson Roadrunners mascot Dusty even joined in on the festivities, taking on the alter ego of “El Polvo” for the night. The Roadrunners will take on the El Lazo identity two more times throughout the season, with the next appearance coming on April 23.

2) Kevin Roy scored the Roadrunners lone goal Friday night against the Silver Knights, bringing his total up to ten goals on the season. Roy not only leads Tucson in goals, and all active Roadrunners in points, he also became the sixth player in the AHL this season to record double-digit goals, joining three other skaters from the AHL Pacific Division.

3) Tucson Roadrunners mainstay Lane Pederson made his NHL debut Friday night for the Arizona Coyotes, when they took on the Anaheim Ducks on the road. Pederson recorded his first NHL goal in the second period, tucking a backhand shot behind Ducks goalie Anthony Stolarz. Pederson joined Tucson linemate Michael Bunting on the Coyotes roster, where Bunting tallied a goal and an assist in Arizona’s previous game against the Colorado Avalanche. Another former Roadrunner, Adin Hill, started in goal for the Coyotes, making 27 saves and picking up a 4-2 victory in Anaheim.

What’s The Word?
Tucson Roadrunners defenseman Jordan Schmaltz on supporting his teammates and coming out hungry for a win Saturday night against Henderson:

“When you’re struggling to score, ultimately you have to be workers, and pay attention to details that much more, especially in the defensive zone or on special teams. We just have to stay with it, keep our heads held high and find some positivity. All you have is your brothers on the team and right now we have to. Pick each other up. [Saturday] is a new opportunity and a new challenge.”

Number to Know
2 – The number of Tucson Roadrunners players that have made their NHL debuts in the Arizona Coyotes last two games. Ivan Prosvetov made his debut Wednesday night in relief of fellow Roadrunner Adin Hill and made 23 saves against the Colorado Avalanche. Two days later, Lane Pederson got his first taste of the NHL when he appeared in Friday night’s 4-2 win over the Anaheim Ducks, scoring his first NHL goal in the process. Not to be overlooked, Michael Bunting made his season debut for the Wednesday night, recording a goal and an assist for his first career multi-point performance in the NHL. Meanwhile, defenseman Jordan gross recorded a three-point night Friday in Anaheim, assisting on three goals and helping the Coyotes to a much-needed victory, putting them in the fourth and final playoff spot in the division.