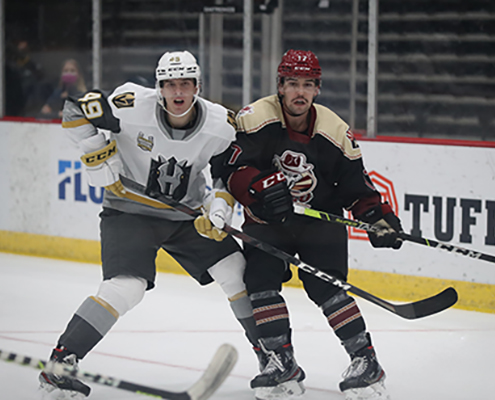 Tucson, Arizona – The Tucson Roadrunners continued their first-ever series with the Henderson Silver Knights Friday night, debuting their “El Lazo de Tucson” identity in the process. Friday’s game was also the first game with a nearly doubled capacity of 1,150 fans inside Tucson Arena.

The first fifteen minutes of play were without a goal but featured plenty of pressure put on Henderson by the Roadrunners, along with a power-play for Tucson. The Silver Knights were the first to put a goal on the board however, with a score by Ben Jones in the final seconds of their first power-play of the night. The goal came with 4:50 left in the first period and was Jones’ fourth score of the year. Tucson was called for a slashing penalty late in the period that wound up carrying over to the second period. The Roadrunners were able to fend off the rest of the Henderson man advantage and returned to five-on-five action. Henderson’s second goal came on another power-play, this time off a deflection with 9:50 remaining in the second period. Ben Jones had the redirection up front for his second goal of the game, assisted by Jack Dugan and Ryan Murphy, the same teammates that had contributed to his first score. Henderson wound up going on four-straight man advantages. This was the polar opposite of Wednesday night’s matchup, where Tucson drew eight of the twelve total power-plays. Henderson added to their lead with their only even-strength goal of the night, when Marcus Kallionkieli scored his first career AHL goal seven minutes into the third period. Tucson got on the board with 8:27 remaining in regulation, when Kevin Roy lit the lamp, becoming the sixth player in the AHL this season to achieve double-digit goals. Tucson went with the empty net late in the third, but came up empty-handed, falling to the Silver Knights by a score of 3-1. Connor LaCouvee started in net for the Roadrunners stopping 30 of 33 shots on goal.

The Roadrunners wrap up their series against the Henderson Silver Knights Saturday night at 7:00 p.m. MST. The game will be broadcast live on The CW Tucson, where “Voice of the Roadrunners” Adrian Denny and Alex Kinkopf of ArizonaCoyotes.com will have the call. You can listen to the game in Tucson on FOX Sports 1450 AM and on the iHeart Radio app or watch the game on AHL TV.

“Unfortunately, the games we’re playing really well in we don’t always win, and obviously when you’re not winning the games you’d expect to, you’re not always going to be perfect, and things can go sideways and not be successful. I don’t think we stuck to our game plan long enough tonight.”

Tucson Roadrunners Head Coach Steve Potvin after the game on how to handle the tough breaks that have come their way this season, and to continue to stick to the game plan.

LANE LIGHTS UP THE LEAGUE – Tucson Roadrunners standout Lane Pederson made his NHL debut Friday night with the Arizona Coyotes in Anaheim. Pederson scored his first career NHL goal in the second period, slipping the puck into the net past Anaheim Ducks goaltender Anthony Stolarz. Tucson’s top-two point getters on the season, Michael Bunting and Lane Pederson, are both up on the Arizona Coyotes roster, scoring goals in back-to-back games. The Coyotes defeated the Ducks 4-2, taking over the fourth and final playoff spot in the West Division. Adin Hill started in net for the Coyotes and stopped 27 shots in the win.

Watch the Tucson Roadrunners leader in goals, Kevin Roy, add to his total with his tenth tally of the season Friday night. Roy became only the sixth player in the AHL to record double-digit goals on the season with this score, that came on even-strength during the third period of action.

The Tucson Roadrunners debuted their “El Lazo de Tucson” identity Friday night, donning new uniforms, along with a bilingual gameday presentation honoring Hispanic heritage and the City of Tucson’s rich culture and history. In addition, the Tucson Roaadrunners mascot Dusty rebranded as “El Polvo.” The Roadrunners will take on the El Lazo moniker two more times this season, with the next date being April 23.