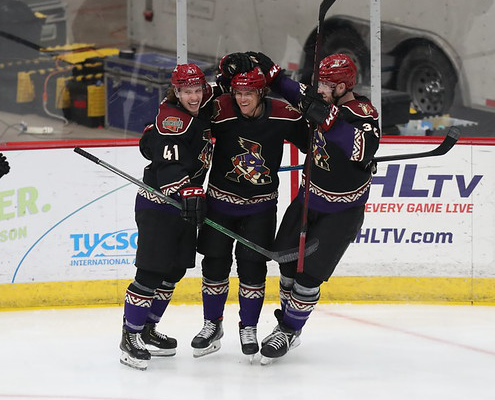 Tucson, Arizona – The Tucson Roadrunners earned their first-ever win against the Henderson Silver Knights Saturday night, defeating them by a score of 4-2. The Roadrunners scored while shorthanded, along with an empty-net goal in the final minutes to hand the Silver Knights their fourth loss of the season.

The first two and a half minutes of action featured plenty of action, starting with Jeremy Gregoire and Jermaine Loewen dropping the gloves, each earning themselves five minutes in the penalty box. Henderson struck first off of the ensuing face-off, when Jimmy Schuldt scored his fifth goal of the season to put the Silver Knights ahead 1-0. Tensions were high throughout the opening period, with both teams playing hard beyond the whistle at times. Tucson came out of the first intermission hungry for some goals, scoring two within thirty-four seconds of each other in the second period to take a 2-1 lead, their first lead of the three-game series with Henderson. Both goals came in the first 3:36 of the middle frame and were scored on tip-ins by Tyler Steenbergen and Brayden Burke. Steenbergen’s score was his second of the year, and came while the Roadrunners were shorthanded, while Burke’s goal was his first of the season. The Roadrunners kept the pressure on Henderson in the second period, outshooting them fourteen shots to four. With Tucson holding onto their one-goal, Tyler Steenbergen gave the team some insurance with his second goal of the night, once again assisted by Jeremy Gregoire. Tucson had a scare when they gave up a goal while on a five-on-three disadvantage to cut their lead to one, but an empty-net score by Nate Sucese put the game away for the Roadrunners, earning them their first win against the Silver Knights on the season, and handing Henderson their fourth loss of the year. Connor LaCouvee stopped 25 shots for the Roadrunners, who outshot the Silver Knights 35 to 27 overall on the night.

The Roadrunners will take some time off before welcoming the San Diego Gulls back into town for a pair of games next weekend. The first game will be Friday, April 9 at 7:00 p.m. MST. You can listen to the game in Tucson on FOX Sports 1450 AM and on the iHeart Radio app or watch the game on AHL TV.

“It was an emotional win. The boys got together and just didn’t accept a loss. Everything came from within the room. They pushed, they demanded, they wanted more, and they got it today.”

Tucson Roadrunners Head Coach Steve Potvin after the game on Tucson’s performance in their 4-2 win over first-place Henderson Saturday night.

DON’T OVERLOOK IT
SCORING IN ALL STYLES – The Tucson Roadrunners scored in three different scenarios in Saturday night’s victory over the Henderson Silver Knights. Tucson scored while shorthanded early on in the second period and tacked on an even-strength goal 34 seconds later. The Roadrunners added another even-strength goal in the third period, before Nate Sucese iced the game with an empty-net goal.

Watch Tucson Roadrunners forward Tyler Steenbergen net his second goal of the night in the third period against the Henderson Silver Knights on Saturday. The game was Steenbergen’s first multipoint performance of the season. Both of his goals were assisted by Jeremy Gregoire, who recorded his second multi-point game of the year.

Tucson Roadrunners forward Brayden Burke handles the puck into the offensive zone Saturday night against the Henderson Silver Knights. Burke scored his first goal of the season in Tucson’s 4-2 win over the Silver Knights, assisted by Kevin Roy and Victor Soderstrom.

Tucson Roadrunners’ Road Ahead: Week of April 5, 2021
Scroll to top