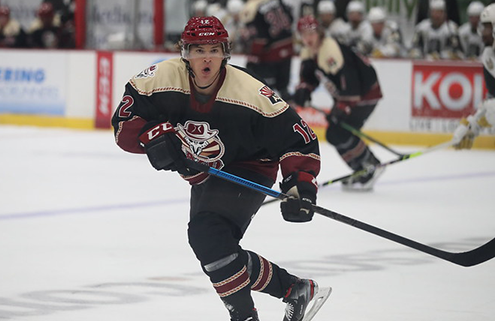 Who’s on the Schedule
The Tucson Roadrunners will conclude their five-game homestand with a pair of games with the San Diego Gulls Friday and Saturday at the Tucson Arena. These games will mark the fifth and sixth meetings between I-8 rivals on the year, where the season series is tied 2-2. In those four matchups, Tucson has outscored San Diego thirteen goals to nine. The Roadrunners and Gulls will face-off two more times at the end of April to wrap up the season series.

Come See Us Live
Tickets are still available for the upcoming weekend series with the San Diego Gulls, taking place Friday, April 9 and Saturday, April 10. Attendance is set at an increased limit of 1,150 fans (approximately 18-percent capacity) with all current health and safety guidelines still in place. Tickets are available for purchase at TucsonRoadrunners.com/WelcomeBack.

Roy Rolls On
Tucson Roadrunners forward Kevin Roy scored his team-leading tenth goal of the season Friday night against the Henderson Silver Knights, becoming the sixth player in the AHL this year to record double-digit goals. Roy has appeared in all twenty-one games this year for the Roadrunners, recording a point in fourteen of them, including five multi-point performances.

A Common Connection
Roadrunners forward Tyler Steenbergen scored twice in Saturday night’s 4-2 win over the Henderson Silver Knights, with both goals being assisted by linemate Jeremy Gregoire. The game marked Steenbergen’s first multi-point performance of the season and was made possible by two excellent feeds from Gregoire in the offensive zone.

Showing Off Our Style
In their three-game series with the Henderson Silver Knights last week, the Tucson Roadrunners wore a different uniform for each game. Wednesday saw the Roadrunners traditional home reds, while Friday marked the debut of the “El Lazo de Tucson” identity and uniforms. The series concluded with a televised Kachina Saturday, for the team’s third appearance in the fan-favorite threads on the season. This weekend, the Roadrunners will be wearing their special Fifth Anniversary uniforms for the first time on Friday night, followed by another Kachina Jersey Saturday the next night.

Did You Know?
The Arizona Coyotes lineup for their 3-2 overtime victory over the Anaheim Ducks featured five members of last season’s Tucson Roadrunners roster. In addition, Lane Pederson and Ivan Prosvetov made their NHL debuts within the last week, with Pederson scoring his first career NHL goal Friday night. Michael Bunting made his season debut last Wednesday, tallying a goal and an assist against the Colorado Avalanche. On Friday, defenseman Jordan Gross recorded three assists in the Coyotes win over the Anaheim Ducks.

Around the Pacific Division
Before traveling to Tucson to take on the Roadrunners, the San Diego Gulls will be hosting the Ontario Reign Wednesday night in Irvine. This game is the second in a back-to-back stretch for the Reign, as they will be facing the Bakersfield Condors the night before in Los Angeles County. Fresh off their series with the Roadrunners, the Henderson Silver Knights will be taking on the San Jose Barracuda Tuesday and Wednesday, before traveling to Bakersfield to play the Condors Friday night. Meanwhile, the Colorado Eagles will be hosting the Texas Stars for four-straight games beginning Tuesday and ending on Sunday.

Our Next TV Appearance
In addition to both games this weekend being broadcast on Fox Sports 1450 AM and AHLtv, the Roadrunners will be back on The CW Tucson for their fourth televised game of the season Saturday, April 10. “Voice of the Roadrunners” Adrian Denny will once again be joined on the broadcast by Alex Kinkopf from ArizonaCoyotes.com, as they take on the San Diego Gulls at the Tucson Arena.