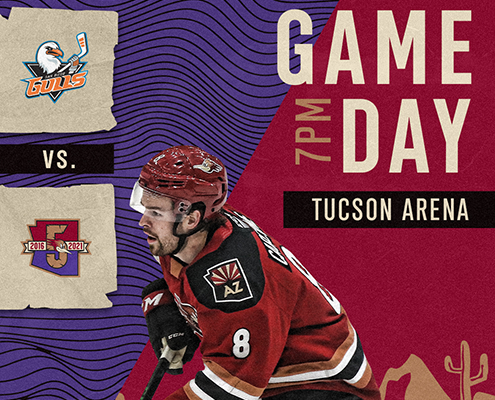 The Tucson Roadrunners welcome their I-8 rivals, the San Diego Gulls, back to Southern Arizona for a pair of games Friday and Saturday. The first game in the series starts at 7 p.m. Friday night, as the team celebrates their fifth anniversary here in the City of Tucson. Limited tickets are available for both games at TucsonRoadrunners.com/WelcomeBack.

Three Things
1) The Roadrunners will be looking to go on a winning streak when they take on the Gulls this weekend. The Roadrunners last game was a statement win over the division-leading Henderson Silver Knights. The Roadrunners outshot the Knights 35 to 27, only allowing 11 shots in the first two periods en route to a 4-2 victory that was televised on The CW Tucson. Tucson scored in three different scenarios in the win, with two even strength goals, a shorthanded score, and an empty-net insurance goal that put the game away for the Roadrunners. The Roadrunners are 2-2 on the season against the Gulls, outscoring them 13-11. This weekend will be the last time the Gulls are in Tucson this season, as the final two meetings for these teams will take place in Irvine, California at the end of the month.

2) The Tucson Roadrunners franchise leader in games played, goals and points, Michael Bunting, recorded his first career NHL hat trick Monday night in Los Angeles. It was only his ninth career game in the National Hockey League, and fourth this season. Bunting completed his hat trick only 8:48 into the second period and led the Coyotes to a pivotal 5-2 victory over the Los Angeles Kings. Bunting credited his coaching staff down in Tucson after the performance, saying “they’ve been great to me, and gave me the confidence to be able to play my game up here [in the NHL].”

3) The Roadrunners will be celebrating their fifth anniversary in Southern Arizona this weekend, including the debut of the team’s special fifth anniversary jerseys Friday night. Fittingly, this marks the fifth straight game the Roadrunners have worn a different uniform, dating back to March 27 on the road in their white jerseys, followed by their classic home reds, El Lazo de Tucson, and Kachina uniforms for the three-game series with Henderson. With no new sweaters left to unveil, the Roadrunners will wear the fifth anniversary jerseys all weekend long, including Saturday night’s game that will be televised on The CW Tucson. “Voice of the Roadrunners” Adrian Denny will once again be joined by Alex Kinkopf of ArizonaCoyotes.com when they wrap up their weekend slate against the San Diego Gulls.

“You put the work in all year and sometimes you aren’t rewarded as much, but that game I think things really came to fruition. It was nice to get a win, and nice to see guys get rewarded for all their hard work.”

Number to Know
43 – The number of standings points the Arizona Coyotes have heading into their Friday night clash with the Vegas Golden Knights, as they hold onto the fourth and final playoff spot in the West Division. Arizona has won seven of their last ten games with a roster comprised of several former Roadrunners, the most notable of which including skaters Michael Bunting, Conor Garland, Lawson Crouse, Michael Chaput, Christian Fischer, Lane Pederson and Jordan Gross. The active goaltender is Roadrunners all-time wins leader Adin Hill, who has started eight-straight games for the Coyotes. His backup is Ivan Prosvetov, who started the first six games for Tucson this season. Jason Demers and Christian Dvorak spent time with the Roadrunners on conditioning assignments, and Ilya Lyubushkin had a quick stint in Tucson last season. The Coyotes face a tough stretch of the schedule beginning Friday night, as six of their next seven games are against the three teams currently higher than them in the division standings (Colorado, Las Vegas, Minnesota). The seventh game is a battle with the Blues, who are three points behind Arizona and vying for the final playoff spot with the Coyotes.