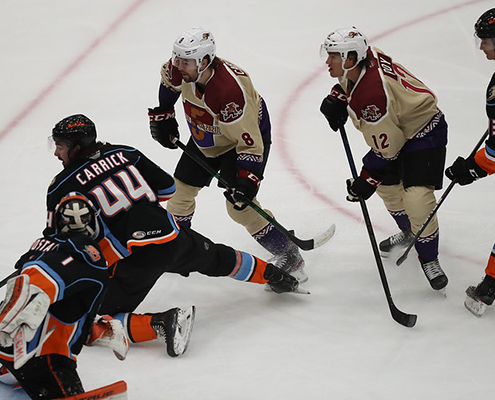 Tucson, Arizona – The Tucson Roadrunners welcomed the San Diego Gulls back in town for a pair of weekend games with their I-8 rivals. The team also celebrated their fifth anniversary in Southern Arizona, donning special fifth anniversary jerseys for the game. Mike Carcone dazzled, scoring four goals and doubling his goal total on the season to eight. Carcone’s offensive showcase wasn’t enough for a win, as the Roadrunners fell to the Gulls by a score of 8-6.

The two teams traded goals early on, as San Diego cashed in on their first power-play of the night to score 2:23 into the first period. A minute and a half later, Mike Carcone buried the puck off a rebound to even the score at one. San Diego retook the lead less than five minutes later, when Brendan Guhle netted his first goal of the season for San Diego. The Gulls added to their lead when Matt Lorito capitalized on a breakaway to make the score 3-1. The Roadrunners pulled to within one a little over a minute later, when Mike Carcone lit the lamp for the second time in only the first period of action to make the score 3-2. San Diego tacked on a pair of goals near the end of the period, including Guhle’s second score of the night, and second of the season overall, to push their lead to 5-2 heading into the first intermission. The Roadrunners outshot the Gulls 16 to 13 in the first period and entered the middle frame of action on the power-play. The minute and a half of time on the man advantage was more than enough for the Roadrunners, as Kyle Capobianco buried a cannon of a shot into the back of the net to reduce San Diego’s lead to two goals in the opening minute of the second period. San Diego once again answered back after a Tucson score to keep their lead at three goals when Andrew Agozzino scored his second goal of the night for

The Roadrunners face the San Diego Gulls once again Saturday night at 7:00 p.m. MST. The game will be broadcast live in Southern Arizona on The CW Tucson, where “Voice of the Roadrunners” Adrian Denny will be joined by ArizonaCoyotes.com writer Alex Kinkopf. You can also listen to the game in Tucson on FOX Sports 1450 AM and on the iHeart Radio app or watch the game on AHL TV.

“He’s been getting an enormous amount of scoring chances, and I have to give him credit, this week he took advantage of practice. He was shooting the puck through the net, and was trying to do everything he could to find a way to get the puck in the back of the net this week in practice, and you could see the results.”

DON’T OVERLOOK IT
PROMISING POWER-PLAY – The Tucson Roadrunners cashed in three times on the power-play Friday night against the San Diego Gulls. Two of the goals were scored by Mike Carcone during his four-goal night, with one more score on the man advantage by Kyle Capobianco. The San Diego Gulls racked up 24 penalty minutes in Friday’s contest, which resulted in half of Tucson’s goals on the evening.

Binge-watch all four of Mike Carcone’s goals from Friday night against the San Diego Gulls. The performance was Carcone’s third hat trick of his AHL career, and each came with a different team (Toronto, Belleville, Tucson).

The Tucson Roadrunners debuted their special fifth anniversary jerseys Friday night against their I-8 border rivals, the San Diego Gulls. The Roadrunners have now worn a different uniform in five-straight games, beginning with the road whites in their last away game, followed by the home reds, El Lazos, and Kachinas in their three-game series with Henderson last weekend.