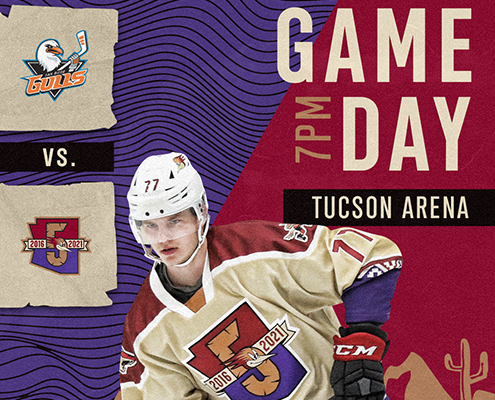 The Tucson Roadrunners wrap up their weekend series with San Diego Gulls Saturday night, in the second of back-to-back games with their I-8 rivals. The game is a continuation of the team’s fifth anniversary celebration this weekend and will be broadcast live on The CW Tucson. “Voice of the Roadrunners” Adrian Denny, along with ArizonaCoyotes.com writer Alex Kinkopf will have the call. Limited tickets are still available for purchase at TucsonRoadrunners.com/WelcomeBack.

Three Things
1) Tucson Roadrunners forward Mike Carcone set a franchise record for most goals scored in a game Friday night against the Gulls, scoring four goals and doubling his goal total on the season. Two of the goals came while on the power-play, and two-thirds of the team’s total scores on the night came off the stick of Mike Carcone. He now has three career AHL hat tricks, with each one coming with a different team. Carcone’s previous two hat tricks were with the Belleville Senators last season, and the Toronto Marlies in the 2018-19 playoffs.

2) Behind Mike Carcone’s outstanding offensive performance Friday night, his linemate Kevin Roy ended up recording more points overall on the night. Roy assisted on all four of Carcone’s goals, along with a fifth assist to defenseman Kyle Capobianco. Roy contributed to five of the team’s six goals in Friday’s contest, and now leads the team outright in both goals and assists. Roy has recorded a point in each of the last three games, and in six of the last eight. He has gone multiple games without a point only once this season and leads the team in multi-point performances with six.

3) The Roadrunners will once again showcase their special fifth anniversary uniforms when they take on the San Diego Gulls Saturday night. In their five seasons in Southern Arizona, the Roadrunners have won two AHL Pacific Division titles, finished as regular season conference champions in 2018, and won a playoff series in their first-ever trip to the postseason. Proudly affiliated with the NHL’s Arizona Coyotes, the team has several former players up in Glendale on the Coyotes roster, including franchise record-holders Adin Hill and Michael Bunting, along with fan favorites such as Conor Garland, Michael Chaput, Christian Fischer, Lawson Crouse, Ivan Prosvetov, Jordan Gross, and Lane Pederson.

“It’s obviously nice when you get those bounces and have a night like that, but it feels better to get a win… for myself to get those points tonight and keep moving forward is a positive sign, but you just have to keep going and play the same way.”

Number to Know
3 – The number of Tucson’s six goals from Friday night that came while on the man advantage. Two of which were scored by Mike Carcone, with the middle power-play score coming from Kyle Capobianco in the second period. The Roadrunners cashed in on the power-play once in each period, and now have 15 power-play goals on the season, good for third-most in the AHL’s Pacific Division. In terms of Tucson’s special teams, the Roadrunners have the second-best penalty-kill percentage in the entire league and have tacked on two goals while shorthanded as well.

We’re Doing It Live
Roadrunners Hockey returns to the radio today at 7:00 p.m. as “Voice of the Roadrunners” Adrian Denny brings you all of the action on Fox Sports 1450 AM. The game will also be broadcast live on The CW Tucson, where Alex Kinkopf of ArizonaCoyotes.com will feature as the color commentator alongside Adrian Denny. All Roadrunners games are broadcast live on Tucson’s Sports Station, along with AHLtv.