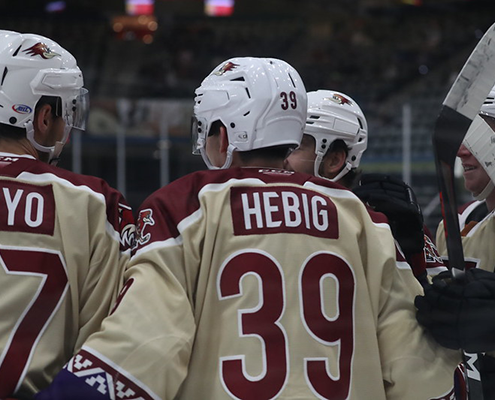 Tucson, Arizona – The Tucson Roadrunners cruised to a 4-1 victory Saturday night against their I-8 rivals, the San Diego Gulls. The Roadrunners excelled on both sides of the ice, limiting the Gulls to only one score on 28 shots, while firing off 39 shots of their own. Tucson cashed in once on the power-play, while fending off San Diego’s only man advantage of the night in the second period.

Cameron Hebig opened up the scoring in Saturday’s matchup with his second goal of the season in as many games to put the Roadrunners up 1-0 midway through the first period. The Roadrunners went on a pair of power-plays in the first frame of action, one of which coming from an instigating penalty earned by San Diego’s Jamie Devane prior to his fight with the Roadrunners newest defenseman Kyle Neuber. The ensuing power-play resulted in Mike Carcone’s fifth goal in the last four periods of hockey. Carcone gave the Roadrunners a 2-0 lead heading into the first intermission, but he wasn’t done yet. Within the first minute of action in the second period, Carcone scored yet another goal, putting his total up to six goals on the weekend. Not to mention, Kevin Roy assisted on all six of Carcone’s goals this weekend along with an extra assist to Kyle Capobianco Friday night, putting his total at seven assists in roughly the last 77 minutes of Roadrunners hockey. The Roadrunners killed off a high-sticking penalty with ease to keep the Gulls scoreless through the second period. That man disadvantage was the only one the Roadrunners faced all night, going a perfect one-for-one on the penalty-kill on the night. Despite their previous matchup featuring 14 total goals, with seven in the first period, the teams entered the third period with only three total goals scored, all by the Tucson Roadrunners. Chris Nell had stopped all 15 shots on goal put on by the Gulls through the first two periods. The Roadrunners added to their lead midway through the third period, when Jan Jenik buried a quality pass from Hudson Fasching for his second goal of the season, making it a 4-0 hockey game. Fasching’s assist was his first point for the Roadrunners this season, coming down from the Arizona Coyotes prior to this weekend’s pair of games. San Diego avoided the shutout when Benoit-Olivier Groulx slipped one past Tucson netminder Chris Nell with 2:37 left on the clock for his seventh goal of the season. Nell ended up stopping 27 of 28 shots against, and helped propel the Roadrunners to a 4-1 win, evening the I-8 rivalry this season at three wins apiece. The Roadrunners will travel to Irvine, California at the end of April for their final two meetings with the San Diego Gulls this season.

The Roadrunners are headed out on the road for a three-game set with the Henderson Silver Knights. The series marks the team’s first-ever visit to the state of Nevada, with the first game on Thursday, April 15 at 7:00 p.m. MST. You can also listen to the game in Tucson on FOX Sports 1450 AM and on the iHeart Radio app or watch the game on AHL TV.

“It was huge. Our guys have been playing some real good hockey, and they really put it together [Saturday]. They’ve been doing the same thing for a long time, where we either weren’t getting the goal support or the timely saves, but I think tonight was a blend of everything, it was great to see.”

Tucson Roadrunners Head Coach Steve Potvin after the game on the team’s performance Saturday night and what it means to pick up a hard-earned win at the end of a homestand.

DON’T OVERLOOK IT
VIDEO GAME NUMBERS – In the two games this weekend with the San Diego Gulls, Roadrunners linemates Mike Carcone and Kevin Roy put up some very impressive numbers. Carcone scored six goals between the two games, improving his total to ten on the season, while Kevin Roy tallied seven assists, pushing him to third in the AHL in total points with 26.

Watch Tucson Roadrunners rookie forward Jan Jenik net his second goal of the season Saturday night against the San Diego Gulls. Jenik was assisted by Hudson Fasching, who recorded his first point since joining the Roadrunners prior to the weekend series. Jenik was a member of the same 2018 Arizona Coyotes draft class as Barrett Hayton and Ivan Prosvetov. He is also one of four Roadrunners players born in the 21st Century, along with Hayton, Victor Soderstrom and Ty Emberson.

Tucson Roadrunners goaltender Chris Nell earned his first win as a Roadrunner Saturday night against the San Diego Gulls in Tucson. In only his second start with Tucson, Nell turned away 27 of the 28 shots on goal he faced and kept the Gulls scoreless for the first 57:23 of the game.