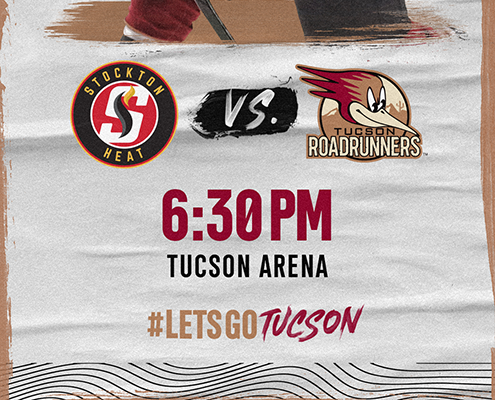 The Tucson Roadrunners return to the ice for a pair of midweek contests with the Stockton Heat at the Tucson Arena Tuesday and Wednesday night. The Roadrunners and Heat last met for a pair of games in the Old Pueblo December 10 and 11, with 15 combined goals scored between the two teams over the weekend. Tuesday’s game marks the Roadrunners first game since December 18, when they defeated the Ontario Reign 4-3 in overtime.

2) Tucson and Stockton have faced off four times so far this season, splitting the season series at two wins apiece. The Roadrunners opened their season on the road in Stockton with a 1-0 overtime victory against the Heat, with Vlad Kolyachonok netting the game-winner for the team’s first goal of the season. Tucson’s other win over the Heat came on December 10 at home when Ivan Prosvetov stopped 47 shots on goal en route to a 5-4 shootout win. In that game, three different Roadrunners recorded their first goal of the season; Blake Speers in the first period, followed by Travis Barron and Victor Soderstrom in the third period.

3) After being called up to the Arizona Coyotes and its Taxi Squad since the Roadrunners last game on December 18, the Coyotes have returned Jan Jenik, Blake Speers, Mike Carcone, Boko Imama, Cam Crotty, and Vlad Kolyachonok to the Tucson roster. Also joining the Roadrunners roster are four players from the ECHL: forwards Max Coatta, Stephen Baylis, and Logan Nelson from the Coyotes ECHL affiliate Rapid City Rush, and defenseman Matt Foley from the Wheeling Nailers. Coatta appeared in the Roadrunners second game of the regular season in Stockton on October 16 after spending training camp with the Roadrunners, while Nelson is the current ECHL leader in points with 35 (10g 25a).

What’s The Word?
Tucson Roadrunners defenseman Ty Emberson on how him and the team can come back out of the break with a strong performance against Stockton Tuesday night:

Number to Know
9 – The number of players in the Arizona Coyotes most recent contest on December 28 that had also spent time with the Tucson Roadrunners. Seven of the nine skaters have appeared with the Roadrunners this season, including defenseman JJ Moser, who scored his first two NHL goals, and forward Mike Carcone, who made his NHL debut in the game.

We’re Doing It Live
Tonight’s game will be broadcast on AHLtv, as well as on the radio on Fox Sports 1450AM, or on the iHeartRadio app. Coverage begins at 5:00 p.m. MST with a special edition of Roadrunners Happy Hour, followed by Roadrunners Warm-Up at 6:15, as Jimmy Peebles gets you ready for the game before “Voice of the Roadrunners” Adrian Denny has the call at 6:30 p.m. live from the Tucson Arena.