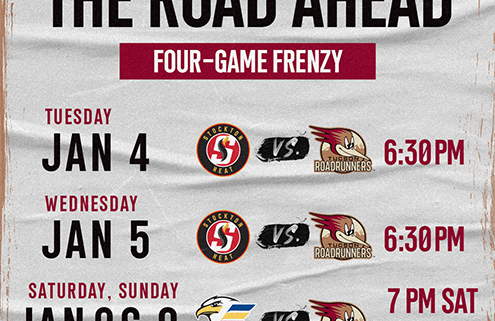 Getting Back On The Ice

The Roadrunners will return to the ice to take on the Stockton Heat in a pair of midweek matchups Tuesday and Wednesday at the Tucson Arena. The Roadrunners and Heat split their first two meetings of the season less than a month ago in the Old Pueblo; with Tucson grabbing a 5-4 shootout victory on Friday, December 10. In that game, Roadrunners goaltender Ivan Prosvetov matched a career-high in saves with 47. When the Heat are back at the Tucson Arena this week, fans can enjoy back-to-back tot nights with $10 including an order of Tater Tots with a draft beer or soft drink included. When the weekend rolls around, the Roadrunners will welcome the Colorado Eagles to Tucson for the first time this season with a pair of contests Saturday and Sunday for a weekend of festivities. Saturday’s game will be the next game televised live on The CW Tucson in Southern Arizona, as the team celebrates five years in Arizona with their special 5th Anniversary uniforms. Prior to the game, the Tucson Arena will be hosting a Whiskey and Wings sampling event. The following afternoon is the Roadrunners Winter Games Kickoff, where they will be joined by local Olympic athletes for a 4:00 p.m. face-off. More information on each of these games can be found HERE.

To celebrate five years in the desert and the start of a new year, the Roadrunners will be wearing their special 5th Anniversary Jerseys when they host the Colorado Eagles on Saturday, January 8, Tucson’s next televised contest. Fans can get their hands on game-worn and game-made 5th Anniversary jerseys by way of raffle, auction, or buy now options that can be found HERE. Proceeds from the night will benefit Roadrunners Give Back and Intermountain Centers.

Back In The Old Pueblo

The Arizona Coyotes have returned forwards Blake Speers, Mike Carcone, and Boko Imama, and defensemen Cam Crotty and Vlad Kolyachonok from the club’s Taxi Squad to the Tucson Roadrunners. Speers has appeared in two games with the Coyotes this season, while Carcone made his NHL debut in Arizona’s 8-7 shootout loss against the San Jose Sharks on December 28.

Along with players making their way back to Tucson from the Arizona Coyotes, the Roadrunners will be adding four players from the ECHL to their roster. Three of the four are from the Coyotes ECHL affiliate, the Rapid City Rush, and include forwards Max Coatta, Stephen Baylis, and Logan Nelson. Rounding out the list from the Wheeling Nailers is defenseman Matt Foley. Coatta appeared in the Roadrunners second game of the regular season in Stockton on October 16 after spending training camp with the Roadrunners. Nelson is the current ECHL leader in points with 35 (10g 25a).

The Roadrunners were well-represented in the Arizona Coyotes most recent matchup on December 28 against the San Jose Sharks. Nine of the 18 skaters have appeared with Tucson, while seven have appeared with the Roadrunners this season. Headlining the list were Lawson Crouse and JJ Moser, who each scored a pair of goals in the contest. Also in the lineup was Mike Carcone, who recorded four shots on goal in his NHL debut. Rounding out the list are forwards Jan Jenik, Barrett Hayton, and Blake Speers, along with defensemen Dysin Mayo, Cam Dineen, and Kyle Capobianco.

Q And A’s With Roadrunners Favs

Last week, Jimmy Peebles from TucsonRoadrunners.com checked in with Roadrunners defenseman Ty Emberson and Tucson Head Coach Jay for a pair of interviews coming out of the holiday break. Topics that were discussed include the stocking each filled out for Roadrunners Give Back before the break, getting back out onto the ice in good form, and the connection between the Roadrunners and the Arizona Coyotes. The full Q and A with Ty Emberson can be found HERE, and the interview with Jay Varady can be read HERE.

The Tucson Roadrunners Happy Hour with Adrian Denny and Brett Fera goes live every Tuesday from 5 p.m. to 6 p.m. on Fox Sports 1450 AM and the iHeartRadio app. This week will be a special edition live from the Tucson Arena prior to the Roadrunners 6:30 matchup with the Stockton Heat.

In addition to Roadrunners Happy Hour, the Tucson Roadrunners Insider Podcast is available every Sunday on the iHeartRadio app, where Adrian Denny and Jimmy Peebles talk most things Tucson Roadrunners. Four episodes were recently released over the span of eight days, including a special postgame edition after the Coyotes game December 28, and episodes featuring the pair of interviews with Ty Emberson and Jay Varady.

Back On The CW Tucson

CW Tucson can be found on the following stations: