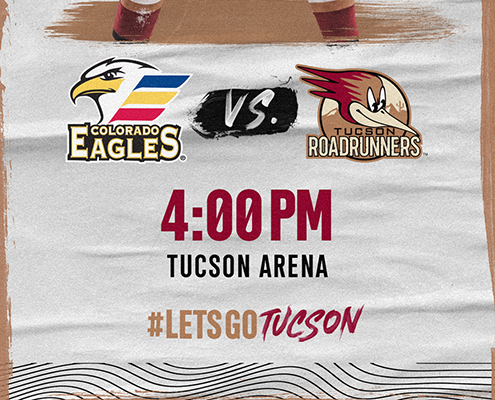 The Tucson Roadrunners close out their first home stand of 2022 with a Sunday afternoon rematch with the Colorado Eagles. The Eagles took the first game of the weekend back-to-back on Saturday night with a 3-2 shootout victory. Tucson overcame a one-goal deficit in the third period to force overtime, earning a standings point in the process. Saturday saw no shortage of physicality, as two fights took place in the first 15:44 of the opening period.

2) Five of the Roadrunners last eight games have been decided by just one goal. Tucson has a 3-0-1-1 record in those contests, including both a win and loss by way of overtime and shootout. The Roadrunners have averaged 3.2 goals per-game in the efforts, including wins over the first and second-place Stockton Heat and Ontario Reign in back-to-back contests.

3) A familiar face was back in the Tucson lineup Saturday night, as rookie forward Matias Maccelli made his first appearance with the Roadrunners since December 18. The 21-year-old recorded an assist on the team’s first goal of the night, a power-play strike by forward Jan Jenik. Despite the three-week gap between games, Maccelli has three points in his last two efforts with Tucson and has averaged a point per-game in 22 games played so far this season.

What’s The Word?
Tucson Roadrunners Head Coach Jay Varady on the performance of goaltender Josef Korenar in Saturday’s series opener against the Eagles, as Roadrunners goaltending allowed two goals or less through overtime for the seventh time this season:

“It’s exciting for our team. [Josef] has been working hard, he’s been a good teammate, he’s been doing a great job. He just hasn’t gotten a whole lot of starts this year. He’s come in for some clean-up and done a good job, and I thought he was outstanding tonight.”

Number to Know
37 – The number of saves made by Tucson backstop Josef Korenar in Saturday night’s clash with the Colorado Eagles. The game marked the 23-year-olds first start since November 13, and his 37 saves are a season-high for the first-year Roadrunner. Korenar’s 1.85 goals allowed average (GAA) and .949 save percentage (SV%) in the contest are also season-highs for the Pehlrimov, Czech Republic native.

We’re Doing It Live
Tonight’s game will be broadcast on AHLtv, as well as on the radio on Fox Sports 1450AM, or on the iHeartRadio app. Coverage begins at 3:45 p.m. MST with Roadrunners Warm-Up, as Jimmy Peebles gets you ready for the game before “Voice of the Roadrunners” Adrian Denny has the call at 4:00 p.m. live from the Tucson Arena.