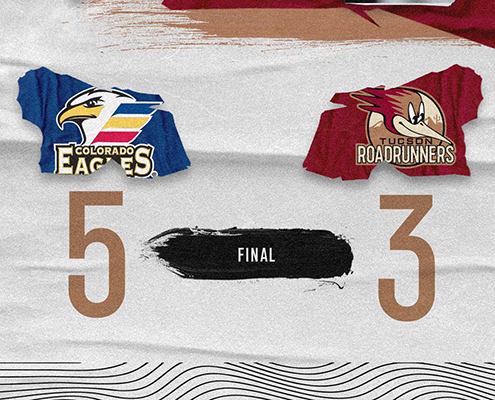 Tucson, Arizona – The Tucson Roadrunners concluded their four-game home stand to open 2022 Sunday afternoon at the Tucson Arena, falling to the Colorado Eagles by a score of 5-3. The Roadrunners scored a pair of goals while on the power-play in the contest, and forwards Matias Maccelli, Mike Carcone, and Boko Imama each extended their active point streaks to three games with goals on the afternoon. Ivan Prosvetov returned in net for the Roadrunners after a night off Saturday and stopped 43 shots on goal.

The Eagles grabbed the first lead of the game with 4:33 gone by in the opening period, with an extended amount of time without a stoppage preceding the score. Colorado went on the power-play less than a minute and a half later with a chance to extend their early lead, but the Roadrunners penalty-kill came up big once again with their first successful effort of the afternoon. Tucson tied up the score at one when they went on their first power-play of the contest, scored by rookie Matias Maccelli for his team-leading fourth strike while on the man advantage. The goal came in the final five minutes of the opening frame but wasn’t the last score of the first period, as Colorado came back the other way and retook the lead at 2-1 with 2:15 remaining. A double-minor for high-sticking on the Roadrunners in the final minute put Tucson’s penalty-kill back to work, and the Eagles man advantage carried over into the second period with the score still 2-1 in Colorado’s favor. With 3:11 still left to survive on the double-minor, the Roadrunners penalty-kill once again got the job done, keeping the deficit at just one goal in the early goings of the middle frame. Back at even strength, Roadrunners goaltender Ivan Prosvetov faced an onslaught of shots on goal by the Eagles, and an eventual wraparound goal made it past Prosvetov to extend Colorado’s lead to 3-1. The AHL Affiliate of the Colorado Avalanche tacked on another with a deflection in front of the net that made it past Prosvetov, pushing their lead to 4-1. The Eagles added another with less than three minutes remaining in the middle frame, a power-play goal to end Tucson’s streak of being perfect on the penalty-kill at 16-straight kills over nearly 14 periods of hockey. The Roadrunners got a goal back with 11 seconds on the clock with their second power-play goal of the contest, this time Mike Carcone with his second special-teams score of the season. Tucson entered the final 20 minutes of regulation still trailing by three goals. The Roadrunners and Eagles opened the third period with a fight between Tucson’s Boko Imama and Colorado’s Keaton Middleton. The bout marked the second time the two have gone at it, with the first coming back on December 4 in Colorado. The fight also marked Middleton’s second match of the weekend, after he dropped the gloves with Cedric Lacroix Saturday night. The next action of the period came just before the midway point of the frame, once again courtesy of Imama. The 25-year-old slipped the puck past Colorado goalie Justus Annunen for his fourth goal of the season, and second in as many nights against the Eagles. The last 10:19 of regulation were without a goal, and the Eagles came away with the 5-3 victory to close out the Roadrunners home stand.

The Roadrunners will embark on a six-game, four-team road trip across the state of California beginning with a pair of games against the San Jose Barracuda Wednesday and Friday. Wednesday’s game is scheduled for 8 p.m. MST, with coverage beginning at 7:45 on Fox Sports 1450AM with Roadrunners Warm-Up hosted by Jimmy Peebles. Then, “Voice of the Roadrunners” Adrian Denny will have all the action live from the SAP Center.

“Unfortunately [the game] was too far at that point, but I thought we did some good things. Boko [Imama] stepped up with a big fight and scored a goal after, that was nice to see. That’s a reason he’s a leader on this team.”

Roadrunners forward Michael Carcone on the effort from Boko Imama and the rest of the team in the third period Sunday afternoon.

FORWARDS FIND THE POINTS – Three Tucson Roadrunners forwards extended their active point streaks to three games in Sunday afternoon’s matchup with the Colorado Eagles: Matias Maccelli, Mike Carcone, and Boko Imama. Maccelli and Carcone were the first to accomplish the feat, when Carcone assisted on Maccelli’s power-play goal in the first period. Carcone added a goal of his own while on the man advantage in the second period, and Imama capped it off with a goal of his own midway through the third period.

Watch Tucson Roadrunners forward Matias Maccelli net the first goal for the Roadrunners in the opening period of Sunday afternoon’s contest with the Colorado Eagles. Maccelli extended his active point streak to three games with the score and has averaged a point per-game in 23 showings this season.

Tucson Roadrunners forward Hudson Fasching eyes the puck during Sunday afternoon’s game with the Colorado Eagles. The 26-year-old recorded his eleventh assist in the contest, good for second-best on the Roadrunners. Fasching has eight points in as many games and hasn’t gone two-straight matchups without a point since November 5 and 6.

Tucson Roadrunners Road Ahead: Cruising Through Cali
Scroll to top