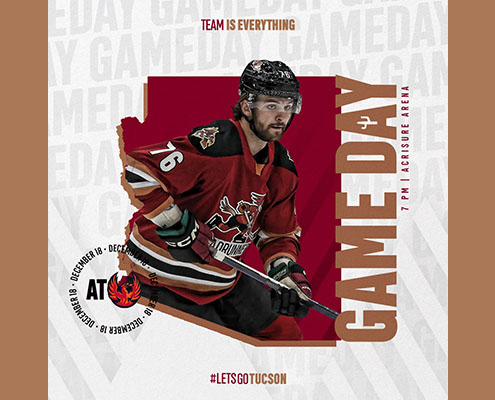 The 12-8-4-0 Tucson Roadrunners continue their three-game road trip Sunday night with the first of two meetings against the Coachella Valley Firebirds. Sunday’s matchup represents the first game to take place at the Acrisure Arena, the new home of the Firebirds. The Roadrunners have taken on the AHL affiliate of the Seattle Kraken four times already this season, all at the Tucson Arena. The Roadrunners enter the two-game set with Coachella Valley having earned at least a standings point in five of their last six contests, including a 7-2 win over the Firebirds on Tuesday, December 13.

Three Things
1) The Roadrunners and Firebirds are meeting Sunday night for the fifth time this season and third time since Tuesday, December 13, a 7-2 Roadrunners win at the Tucson Arena. In that game, the Roadrunners scored a franchise-record five power-play goals and Mike Carcone recorded his fourth career AHL hat trick with a four-point night (3g 1a). Both teams are coming off of high-scoring wins over the San Diego Gulls at the Pechanga Arena: an 8-1 Firebirds win on Friday, December 16, and a 9-4 Roadrunners victory on Saturday, December 17. The Roadrunners have scored 19 goals over their last three contests, while Coachella Valley has netted 14 goals over the same stretch. Tucson has earned a standings point in two of their last three matchups with the Firebirds dating back to Saturday, November 12.

2) Tucson had a historic outing against the San Diego Gulls Saturday night at the Pechanga Arena to open their current three-game road trip. Their 9-4 win over San Diego matched a team record for the most goals in a game, which was first set on May 1, 2021, which was a road matchup against the Gulls. Tucson scored a franchise-record six goals in the first period, including the fastest consecutive goals in team history. Laurent Dauphin and Mike Carcone combined for the feat as they lit the lamp just ten seconds apart to jump out to a 2-0 lead with 3:24 gone by in the opening frame. Dauphin and Carcone each wound up with a pair of goals in the win, along with Carcone’s linemate Nathan Smith. In all, nine Roadrunners finished the night with multiple points, and netminder Ivan Prosvetov set a season high with 39 saves in the win.

3) With a four-point performance on Saturday in San Diego, Roadrunners forward Mike Carcone enters Sunday atop the American Hockey League for total scoring with 35 points (13g 22a) in 23 apperances. His two goals and two assists against the Gulls on Saturday was Carcone’s second four-point outing over the last three games, after he notched a hat trick and an assist on Tuesday, December 13 against Coachella Valley. The 26-year-old has totaled 21 points (9g 12a) over his last 12 outings, which includes six multiple-point performances. Carcone has gone without a point in back-to-back outings just once over the last year and has twice as many multi-point nights this season (12) than games without a point (six).

“It’s a big game [Sunday], it’s their Home Opener. Our Head Coach [Steve Potvin] told us to expect a battle. We have to hit the reset button and go at it.”

Roadrunners goaltender Ivan Prosvetov on Sunday’s matchup with the Firebirds, which represents Coachella Valley’s Home Opener at the Acrisure Arena.

Number to Know
13 – The number of Roadrunners to record a point in Saturday’s 9-4 win over the San Diego Gulls at the Pechanga Arena. Nine of those 13 skaters notched multiple-point performances, led by Mike Carcone’s four-point outing (2g 2a) as well as Adam Cracknell’s three-point night (1g 2a) in his return to the lineup after missing both contests against Coachella Valley earlier this week. Mike Carcone, Adam Cracknell and Vlad Kolyachonok finished the big win with plus-four ratings, While defenseman Ronald Knot’s plus-five to set a new team record.

We’re Doing It Live
Tonight’s game will be broadcast live on AHLtv, as well as on the radio at FOX Sports 1450AM and the iHeartRadio app. Coverage will begin at 6:45 with Roadrunners Warm-Up hosted by Jimmy Peebles, before “Voice of the Roadrunners” Adrian Denny has all the action from the Acrisure Arena.