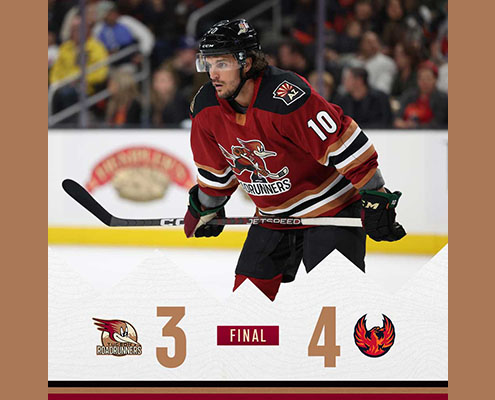 Roadrunners forward Jan Jenik netted his second goal of the night with just 1:45 remaining in the third period of Sunday’s matchup against the Coachella Valley Firebirds. The performance marked Jenik’s first multi-goal game of the season and first since March 30, 2022 in the NHL as a member the Arizona Coyotes. The 22-year-old also had a pair of multi-goal games a week apart with Tucson on February 19 and 26 of 2022.

DINEEN AND DAUPHIN DO IT AGAIN – Longtime Roadrunners Laurent Dauphin and Cam Dineen each contributed to Tucson’s offense on Saturday against the Coachella Valley Firebirds. Dauphin lit the lamp for the tenth time this season with a goal in the final seven seconds of Sunday’s middle period, while Dineen assisted on the Roadrunners other two goals for his second consecutive multiple-point performance. Dauphin has scored three goals over his last two outings and has 22 points on the season (10g 12a), while Dineen has tallied 13 points (1g 12a) over his last ten games with 19 total points this year (2g 17a).

Tucson Roadrunners forward Jan Jenik scored a pair of goals on Sunday against the Coachella Valley Firebirds to extend his active scoring streak to three games. Jenik was back in the Tucson lineup after suiting up for the Arizona Coyotes on Saturday night at Mullett Arena back home in Arizona. The 22-year-old has recorded four points (2g 2a) over his last three outings, all against Coachella Valley. Jenik has also tallied seven points (5g 2a) over his last six road contests dating back to November 4 in Calgary.

“Everybody worked hard to get back in the third period and try to bring the game to overtime. We gave it our best effort, but sometimes things don’t go our way. We have to fix our mistakes and get better for [Tuesday].”

Roadrunners defenseman Vlad Kolyachonok on the team’s comeback attempt in Sunday’s 4-3 loss to Coachella Valley. Tucson scored in the final 1:45 of the third period to get to within a goal of the Firebirds.

The first goal in the history of the Acrisure Arena was scored by the home team, as the Firebirds took a 1-0 lead on a power-play strike 8:49 into the opening period. After a combined seven goals over the last two first periods between Tucson and Coachella Valley, Sunday’s opening 20 minutes ended with the Firebirds leading by a score of 1-0. Coachella Valley extended their advantage with a pair of goals in the first 5:42 of the second period to make it a 3-0 lead over the Roadrunners. The early scoring of the middle frame included the Firebirds second power-play goal of the night after being outscored by the Roadrunners six to one on the man-advantage over their last two meetings. Tucson got on the board with a goal by Jan Jenik, who was back with the Roadrunnners after suiting up for the Arizona Coyotes Saturday night at Mullett Arena. The score was Jenik’s fourth time lighting the lamp this year, as Tucson trailed 3-1 at the midway point of the second period. Coachella Valley got one back with their third power-play goal of the contest, as they pushed their lead back out to 4-1 with 5:29 remaining in the second. The Roadrunners pulled back to within two of the Firebirds with a goal by Laurent Dauphin in the final seven seconds of the middle period, his tenth goal of the season. Dauphin’s goal was the start of the longest scoreless stretch of the game, which lasted for 18:22 before being ended by another Roadrunners goal. The goal was scored by Jan Jenik for his second of the night, as it brought Tucson to within a goal of the Firebirds at 4-3 with 1:45 remaining in regulation. The Roadrunners late comeback attempt came up just short, as they fell to the Firebirds by a score of 4-3 in Coachella Valley’s Home Opener.

Holiday Hockey With The Roadrunners Thursday and Friday
Scroll to top