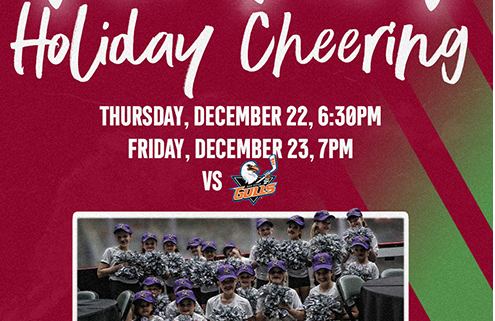 Tucson, Arizona – The Tucson Roadrunners, AHL affiliate of the Arizona Coyotes, have announced details for the team’s final home stand before Christmas as they welcome their I-8 Border Rivals the San Diego Gulls to Tucson Arena this year on Thursday, December 22 at 6:30 p.m. and Friday, December 23 at 7 p.m.

A Thirsty Thursday with the Barstool Sports Arizona Bowl will kickoff the weekend with $3 Draft Beers. The team is also offering Rudy’s Texas B-B-Q Family Packs that include four tickets to the game, four Roadrunners hats and a $25 Gift Card to Rudy’s for only $99 at TucsonRoadrunners.com/Rudys.

The Roadrunners have several holiday offers available at TucsonRoadrunners.com/Holidays for fans to take advantage of leading up to Christmas. Featured is the team’s Holiday Pack that includes: two tickets to Star Wars Night on Saturday, January 28,  two tickets to any game and a Roadrunners long sleeved t-shirt.

The team will return home after a quick three-game trip to California that wraps up Tuesday at 8 p.m. in Palm Desert, California against the Coachella Valley Firebirds.

The Barstool Sports Arizona Bowl will take place Thursday, December 30 at Arizona Stadium as the University of Wyoming takes on Ohio University at 2:30 p.m. in Tucson’s annual tradition to ring in the New Year. Tickets can be purchased HERE.