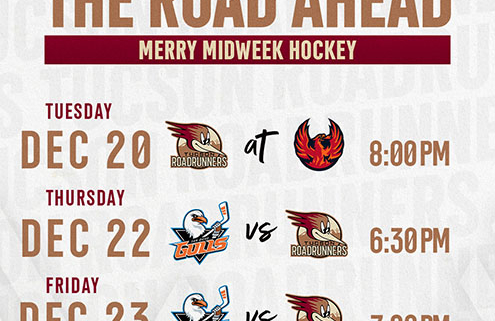 The 12-9-4-0 Roadrunners wrap up their quick three-game road trip Tuesday night with the second of two matchups against the Coachella Valley Firebirds. Tucson will look to finish the trip with a 2-1 record after the Firebirds won the first ever contest at Acrisure Arena on Sunday, December 18 by a score of 4-3. Tuesday coverage begins with Roadrunners Happy Hour from 5 p.m. to 6 p.m., followed by Roadrunners Warm-Up at 7:45 p.m. After Tuesday’s game in Coachella Valley, the Roadrunners return home for a pair of games against the San Diego Gulls before Christmas on Thursday, December 22 and Friday, December 23. Tucson opened their current road stint by defeating the Gulls by a score of 9-4 at the Pechanga Arena, as the Roadrunners set and matched several team records in the process.

Coming Home For The Holidays

The two-game set between the Roadrunners and their I-8 Border Rivals at the Tucson Arena begins with Thirsty Thursday featuring $3 Draft Beers with the Barstool Sports Arizona Bowl, as well as Rudy’s Texas B-B-Q’s Family Packs that include four tickets, four hats and a gift card to Rudy’s Texas B-B-Q. The series wraps up the next night with Tucson’s first Festivus Friday inspired by the classic Seinfeld episode, “The Strike.” For more information and to purchase tickets, visit TucsonRoadrunners.com/Fun.

A Week For Breaking Records

Tucson rewrote the team record books over the last week, setting and matching numerous marks against the Coachella Valley Firebirds and San Diego Gulls. Their first franchise record was set in a 7-2 win on Tuesday, December 13 against Coachella Valley, when Tucson netted five goals while on the man-advantage. The previous record of four power-play goals had only been achieved once, on November 18, 2016 against the Manitoba Moose. The rest of the records broken by the Roadrunners were from the first period of their 9-4 win over the San Diego Gulls on Saturday, December 17. With under four minutes gone by in the opening frame, Laurent Dauphin and Mike Carcone combined for the fastest two goals in franchise history, scored ten seconds apart to take a 2-0 lead. A total of six goals were scored by the Roadrunners in the opening 20 minutes against San Diego to set a new team record for goals in a period. Tucson lit the lamp three more times in the third period to match the franchise mark for goals in a game, which was originally set in a 9-2 win over the Gulls on May 1, 2021.

Roadrunners forward Mike Carcone enters the week atop the American Hockey League for total scoring with 36 points (13g 23a) in 24 outings. Carcone took the lead for the first time with a four-point performance (2g 2a) on Saturday, December 17 against the San Diego Gulls, his second four-point outing of the week. The 26-year-old recorded his fourth AHL hat trick earlier in the week on Tuesday, December 13 against Coachella Valley, and tacked on an assist for his first four-point night of the week. Through 24 appearances this season, Carcone is five points away from matching his career high of 41, which he set last year with 24 goals and 17 assists in 48 games for Tucson.

A Unique Week For Jenik

Forward Jan Jenik returned to the Roadrunners lineup in a big way Sunday night after suiting up for the Arizona Coyotes in the NHL the night before. The 22-year-old scored a pair of goals for Tucson as they took on the Firebirds in Coachella Valley. Sunday was Jenik’s first multi-goal performance since March 30, 2022, which he achieved at the NHL level with a pair of goals against the San Jose Sharks. Jenik was the second Roadrunner to receive a call-up to the Coyotes this season, after Laurent Dauphin took the ice for Arizona on November 13 against the New York Rangers.

With his goal in the final seven seconds of Sunday’s middle period against Coachella Valley, Roadrunners forward Laurent Dauphin became the fourth Tucson skater with ten goals on the season. Dauphin joined Mike Carcone (13), J.S. Dea (10), and Adam Cracknell (10) to reach double-digit goals, while his 22 total points (10g 12a) are the third most on the team overall. The 27-year-old has reached ten goals for the fourth time over the last five years, and is on pace to set an AHL career high for goals in a season (17 in 2016-17).

Defense Does It All

The Roadrunners defense has been contributing to Tucson’s high-scoring offense as of late. Alternate Captain Cam Dineen has notched back-to-back multi-point outings for the Roadrunners with a goal and three assists over the first two nights of their current road trip. The 24-year-old is currently eighth in the American Hockey League for points by a defenseman with 19 (2g 17a) in 21 games. Dineen was one of three blue-liners to tally an assist on Sunday against Coachella Valley along with Vlad Kolyachonok and Ronald Knot. Kolyachonok has recorded a point in four of his last six efforts, while Knot has a point in three of his last four. Knot also set a Roadrunners franchise record on Saturday with a plus-five in their 9-4 victory over San Diego. Five of the six defensemen in Tucson’s lineup on Sunday in Coachella Valley had NHL experience with the Arizona Coyotes, while the 28-year-old Knot has played professionally overseas and represented the Czech Republic at the 2022 Winter Olympics.

After Sunday’s matchup with the Coachella Valley Firebirds at the new Acrisure Arena, the Roadrunners have already visited four arenas this season for the first time in team history. It began on Opening Night with a 2-1 win over the Silver Knights at The Dollar Loan Center in Henderson, followed by a 5-1 win over the Barracuda at the Tech CU Arena in San Jose later that month. Tucson’s next stop after San Jose was the Scotiabank Saddledome in Calgary, where they defeated the Wranglers by a score of 3-1. Through 25 games this season, the Roadrunners have visited more new buildings (four) than arenas they had already played in (two: San Diego and Ontario).