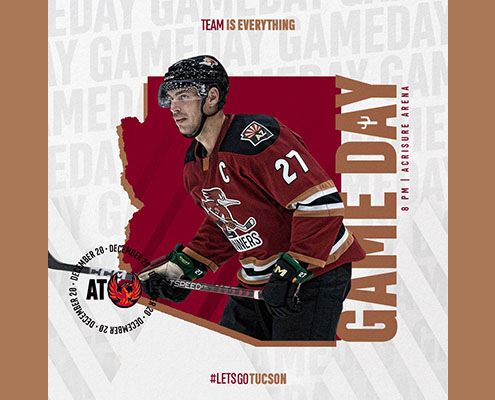 The 12-9-4-0 Tucson Roadrunners take on the Coachella Valley Firebirds for their third game in four nights on Tuesday at the Acrisure Arena. Tucson faced off with the AHL affiliate of the Seattle Kraken on Sunday night in the first ever game at the new home of the Firebirds in Palm Desert. Coachella Valley won their home opener and the series opener by a score of 4-3, with Tucson scoring each of the final two goals. Following Tuesday’s series finale, the Roadrunners will return home for a pair of games before Christmas against their I-8 Border Rivals, the San Diego Gulls.

Three Things
1) Tuesday marks the sixth contest of the season between the Roadrunners and Firebirds, tying Coachella Valley with the San Jose Barracuda for the most meetings with Tucson on the year. The Firebirds are one of just three opponents the Roadrunners have faced both at home and on the road this year, along with San Jose and the Henderson Silver Knights. Following Tuesday’s matchup from the Acrisure Arena, the Roadrunners will visit Coachella Valley again on January 16 and February 15 to close out the season series. The Firebirds represent the closest geographical rival to Tucson after joining the AHL’s Pacific Division ahead of this season, with roughly 329 miles separating Tucson Arena and Acrisure Arena.

2) Tucson has tallied a multi-goal period in each of their last four outings against the Coachella Valley Firebirds, and in five of their last six contests overall. This includes four-straight multi-goal frames for the Roadrunners to open their two-game series against the Firebirds last Tuesday and Wednesday in Tucson. The Roadrunners have also had a player put up a multi-goal performance in two of the last three games with Coachella Valley: a Mike Carcone hat trick on Tuesday, December 13, and a pair of goals by Jan Jenik in the series opener on Sunday, December 18.

3) The Roadrunners scored each of the final two goals on Sunday against the Firebirds while holding Coachella Valley scoreless for the final 25:36 of the contest. Tucson has been able to net back-to-back goals in each of the last four matchups with the Firebirds, including a season high of seven-straight on Tuesday, December 13. Forwards Laurent Dauphin, Mike Carcone, and Ben McCartney have each lit the lamp in two of the last three outings with Coachella Valley, as Carcone notched his fourth AHL hat trick and first of two four-point performances this week on December 13.

Roadrunners defenseman Cam Dineen on the points of emphasis for Tucson going into Tuesday’s matchup against Coachella Valley.

Number to Know
3 – The number of Roadrunners defenseman to record a point in Sunday’s series opener with the Firebirds. Cam Dineen led the way with a pair of assists, while Ronald Knot and Vlad Kolyachonok each recorded assists on Laurent Dauphin’s goal late in the second period. Dineen enters Tuesday tied for fourth place in the AHL for assists by a defenseman (17) and in eighth place for total points by a blue-liner with 19. Meanwhile, Knot and Kolyachonok have each tallied a point in three of their last four outings.

We’re Doing It Live
Tonight’s game will be broadcast live on AHLtv, as well as on the radio at FOX Sports 1450AM and the iHeartRadio app. Following a special pregame edition of Roadrunners Happy Hour from 5 p.m. to 6 p.m., regular pregame coverage will begin at 7:45 with Roadrunners Warm-Up hosted by Jimmy Peebles, before “Voice of the Roadrunners” Adrian Denny has all the action from the Acrisure Arena.