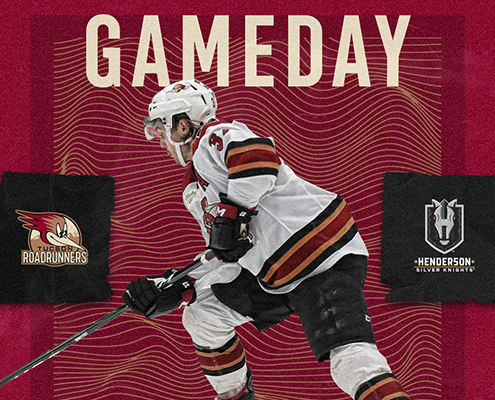 The Tucson Roadrunners continue their first trip to Nevada in franchise history Saturday night, taking on the Henderson Silver Knights at the Orleans Arena. Tucson dominated the puck possession in Thursday night’s series opener, but a few untimely bounces sent the Roadrunners off the ice with a 2-1 overtime defeat. Tucson will look to reverse their fortunes in game two of the series, earning their tenth win and handing the Silver Knights their seventh loss of the season in the process.

Three Things
1) Roadrunners forward Tyler Steenbergen has three goals in the team’s last two games with the Henderson Silver Knights after getting the Roadrunners on the board in the first period Thursday in Las Vegas. He enters Saturday’s matchup on a four-game point streak, with the three goals against Henderson and two assists against the San Diego Gulls during that span. Steenbergen is no stranger to timely goals, as he scored the “Golden Goal” as a member of Team Canada in the 2018 IIHF World Junior Championship.

2) Tucson goaltender Chris Nell has started the last two games for the Roadrunners, putting up solid numbers. Nell stopped 51 of the 54 shots on goal from those games, and he was less than three minutes away from his first career AHL shutout last Saturday against the San Diego Gulls. Nell has posted a 1-0-1-0 record and .944 save percentage in his last two outings. Nell appeared in 24 games over three years for the Hartford Wolf Pack from 2016 to 2019 and spent last season in the ECHL. Nell and fellow Roadrunners goalie Connor LaCouvee were teammates on the Maine Mariners for a time during the 2018-19 campaign.

3) The Roadrunners have a record of 2-1-1-0 in their last four games, all against the top two teams in the AHL Pacific Division in San Diego and Henderson. The Roadrunners have outscored their opponents 16-13 in this stretch and outshot them 159-115. Tucson recorded more shots on goal than their opposition in each of the four contests, including a season-high 52 shots on goal against the San Diego Gulls on April 9.

What’s The Word?
Tucson Roadrunners forward Jeremy Gregoire on wrapping up the season series with first-place Henderson this weekend in Las Vegas:

“We had our chances and they’re a really good hockey team. We’ve been able to match their intensity and scoring chances and even beat them. We just need to step up [Saturday] and earn our two points… We have two games left [this weekend] and we’ll make the best out of it.”

Number to Know
4 – The number of Saturday wins the Roadrunners have in their last five games to take place on that day of the week. In those games, Tucson has outscored their opponents 19-8, never allowing more than two goals to their opponents. All five games have been against the top two teams in the division, San Diego and Henderson, and the streak will continue when the Roadrunners clash with the Silver Knights Saturday in Las Vegas. Coincidentally, four is also the number of goaltenders currently on the Roadrunners roster, after backstops David Tendeck and Ivan Prosvetov were assigned to Tucson from the Arizona Coyotes Friday afternoon.